Tiruchirapalli (“Trichy”) is home to some of the most legendary and ancient temples in India, as well as to some beautiful stories and history. Here are but a few: 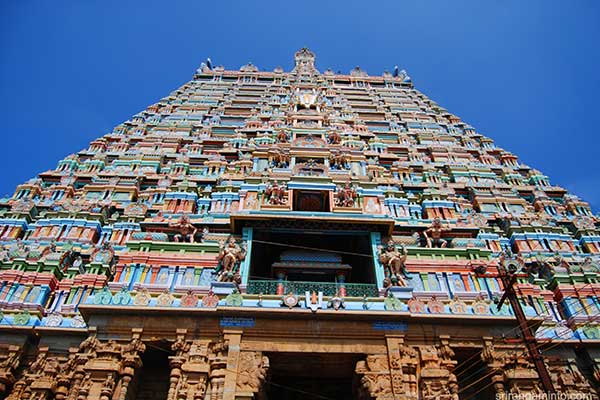 Perhaps its most famous temple in the city is the Sri Ranganath Swami Temple. The full account of the temple’s idol have been collected in the Sri Ranga Mahatmya. Here is the story as presented in that sacred text:

Once, when Brahma was in a state of deep meditation, Lord Vishnu blessed him with an idol of himself known as Ranga Vimana1.

It said that Lord Brahma then gave the idol to Viraja. From Viraja it was handed down to Vaiswatha, then to Manu, to Ishwaku and then to Lord Rama. Each of these saints is said to have worshipped the idol in their day. After defeating the demon king Ravana in Lanka, it is said that Rama gave the idol to Vibhishana, Ravana’s righteous brother, for his support during the war. But when Vibhishana tried to take the idol to Lanka with him, he was tricked out of it by Lord Ganesha.

Although Vibhishana was devoted to Rama and had helped him in the war, he was still a demon by birth. The gods did not like the idea of the Ranga Vimana being taken off Indian soil. Using the help of Lord Ganesha, they devised a plan to keep it in Bharat.

When Vibhishana was passing through Tiruchirapalli, he decided to bathe and do his daily worship in the Kaveri River. But he was in a bit of a predicament, because Rama had told him that the idol would become permanently fixed to the ground wherever it was first set down.

Not knowing what else to do, Vibhishana tried to find someone to hold the idol while he took his bath and performed his ablations. This is where Lord Ganesha came in. Disguising himself as a young cowherd, he offered to hold the idol for Vibhishana. Then when Vibhishana was bathing in the river, he set the Ranga Vimana idol firmly on the ground, where it is fixed to this day.

Upon seeing the cowherd’s deception, Vibhishana ran after him. Lord Ganesha climbed up to the top of a large nearby cliff. But, there, Vibhishana caught him and struck him on the forehead. At that moment, Ganesha revealed his true form to Vibhishana, who immediately apologized2, asked for his blessings and continued on his way to Lanka.

The area where the Ranga Vimana was set down by Vibhishana eventually was covered by a thick forest, and thus the idol was lost. It was re-discovered thousands of years later when a Chola king was chasing a parrot and accidentally stumbled across it. It was the king who established the Sri Rangam Temple, which today is one of the largest temple complexes in the world. The enormous rock Lord Ganesha climbed upon now forms the Uchi Pillayar Temple, only a few kilometers from Sri Rangam.

Once there was a pregnant woman living on the banks of the Kaveri River, which flows through Tiruchirapalli. As her time of delivery grew near, her husband crossed the river in order to bring back her mother for the birth. After he’d crossed over, however, heavy rains came and the river became flooded. The woman was in great distress, knowing that her husband most likely would not be able to cross back over in time for her delivery. She began praying desperately to Lord Shiva. Filled with compassion for the woman’s plight, the Lord disguised himself in the form of the woman’s mother and delivered the child. When the flood subsided and the husband and mother were able to cross, they were shocked to find that the woman had already successfully delivered her child. Soon the family realized that it had all been a play of the Lord. As Lord Shiva came in the form of a mother, the temple erected there is known as the Tayumanavar (meaning “He also became a mother).” The child is said to have grown up to become a saint,

This temple is one of the pancha bhuta sthalams (temples wherein God is worshipped in the form of one of the great elements of air, wind, water, fire and earth). In this temple, Lord Shiva is in the form of the element of water, which continually bubbles forth from the springs in the sanctum sanctorum. There is also a Shiva Lingam3 in the temple, which has a beautiful story surrounding it, involving a spider and an elephant.

It is said that in his next birth the spider was born as King Kochchengan, the builder of  the Thiruvanaikkaval Temple. Interestingly, the sanctum sanctorum of the temple has been constructed in such a way that no elephant would be able to enter it. The entrance is very low, has a very small vestibule and the lingam itself resides in an even smaller chamber.

It is also said that even if the Kaveri River dries up in the peak of summer, the water within this chamber is ever bubbling forth. Thus, there is water surrounding the lingam year round.

Three of the four Nalvars5 have sung in praise of the Lord in the Thiruvanaikkaval Temple in the Devaram, a collection of devotional verses about Lord Shiva.

Fearing the demon Karan (of the Kara-Dhushana duo of the Ramayana), the gods are said to have taken the form of ants to worship Lord Shiva in the form of this Shiva Lingam. As such, one can see that the lingam tilted forward in order to accept the worship of his tiny devotees.

1 In Vishnu Purana, Vishnu will be taken as the All-powerful Lord and the other gods will be as subservient. In Shiva Purana, Shiva will be the All-Powerful, etc. As the ultimate reality of God is one of pure consciousness, this is not a contradiction, but merely a way of presenting the Almighty in various forms so as to conform to the mind sets of various groups of people.

2 Vibhishana’s response stands in sharp contrast with the story of the Gokarna Shiva Lingam, which Ravana was tricked out of in a similar fashion. Ravana could have cared less who had tricked him out of the Shiva Lingam. And in his anger and frustration, he tried to rip it free from the soil, only succeeding in twisting a piece of it into the shape of a go karna [cow’s ear].

4 Ritualistic bathing of a sacred object.

5 The four Nalvars (literally meaning “four respected people”) are the most esteemed of the 63 Nayanars, the famous Shaivite saints of Tamil Nadu.