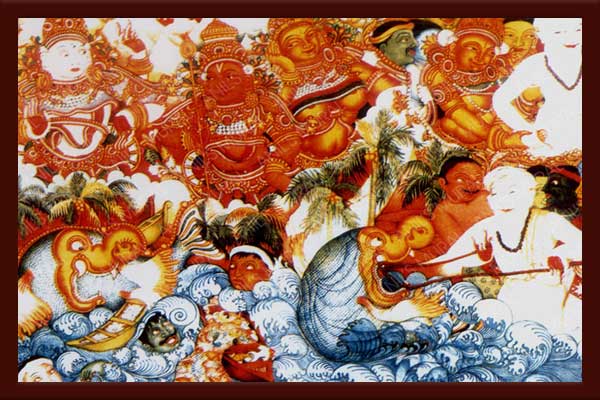 In the Alappad Panchayat1, district of Kollam, Kerala state, South India, there is a small village named Parayakadavu. This village lies amidst an endless expanse of coconut palms stretching along a narrow peninsula separated from the mainland to the east by an intercoastal waterway, while the western shore of the village is buffeted by the sparkling blue-green Arabian Sea.

The people of the village belong to a humble clan of fishermen who proudly trace their ancestry as far back as the sage Parasara. It is sage Parasara who married the fishermaid Satyavati, mother of Sri Veda Vyasa, the renowned codifier of the Vedas. There are many legends told about the sanctity and greatness of this village where daily life and social custom are still closely associated with divine myths, stories which the villagers strongly believe took place thousands of years ago. One such legend is as follows: Once Lord Subramanya2, son of Lord Shiva and Goddess Parvati, committed a serious error. Infuriated by the transgression of His son, Lord Shiva cursed Subramanya, causing him to be born as a fish. Dejected by the fate of her son, Parvati requested the Lord to forgive Subramanya’s fault. Instead of consoling Her, Shiva became more angry and condemned Parvati as well to be born as a fisherwoman. Later when Lord Shiva’s anger had subsided, He told Subramanya that He Himself would come and liberate both of them at the appropriate time and thus blessed them. In accordance with Lord Shiva’s curse, Lord Subramanya assumed the form of a fish, rather, of a huge whale. Appearing in the sea of Alappad, the whale caused the fishermen terrible harm. Accustomed to fishing both during the day and night, the fishermen could now no longer venture into the seas. Sometimes the whale tore the cast nets of the fishermen to shreds, and at others it overturned their boats, endangering their very lives. The villagers were doomed to poverty and starvation.

The king of the fishermen failed to find a solution. His treasury was becoming bankrupt, as he was feeding the starving people. Finally, in an attempt to solve the problem, he made a proclamation: the person who could catch the troublesome whale would be richly rewarded, and would also be given the hand of the king’s beautiful daughter in marriage. Yet the huge whale was so fearsome that nobody came forth to accept the challenge. The king and his subjects were completely disheartened, when an old man mysteriously appeared from the north. Nobody knew who he was. Approaching the king, his back bowed with age, he boldly declared that he could catch the huge whale and save the people from complete devastation.

Accompanied by the astonished king and his subjects, the old man walked confidently toward the sea. Making a long rope by twisting long strands of vines, the old man threw one end into the sea while holding the other end tightly in his hand. The rope of vines encircled the place where the huge whale was lying submerged. Passing the rope to the fishermen, he instructed them to pull with all their strength while chanting a particular mantra. As instructed by the old man, the fishermen started pulling the rope while chanting the mantra. After hours of tremendous effort, the giant fish, entrapped in the vine rope, was dragged to the shore.

Suddenly, to everyone’s amazement, the whale vanished, and in its place stood Lord Subramanya, released by Lord Shiva from the curse. A temple for Lord Subramanya was built on the spot where the giant fish had been shored. That temple stands today as a living monument to remind us of the old story.

The legend does not end there. Now Lord Shiva, in the guise of the old man, stepped forward and stood before the king, demanding the reward of the hand of the princess in marriage. The king, who had promised his only daughter to the champion who saved his people, was now trapped in a dilemma. He and his subjects were completely distraught. How could a father, especially as king, give his exquisite young daughter in marriage to an old man? The king begged him to ask for anything in the entire kingdom but his daughter. The old man calmly replied that a king must keep his promise and be truthful to his word.

Now the king was in a real quandary. Truth was the strength of the fishermen; they firmly believed that truth was their protector. If one were not truthful, they said, one who went fishing was jumping into the wide-open, fierce mouth of death. The king was paralysed; he could neither break his vow nor give his beloved princess in marriage to the old man. At this point, the princess, who was in fact Goddess Parvati Herself, stepped forward and spoke without hesitation: “Father and most noble king, it is everyone’s duty to protect and preserve righteousness (dharma). Nothing should stand against it.” Despondent, the king had no choice but to allow her to depart with the old man. No one suspected that the humble fishing kingdom had become the stage for a divine drama in which Lord Shiva and Goddess Parvati had been reunited. With heavy hearts, the people followed the divine couple for some distance asking, “Where are you going? We would like to come with you.” They replied, “We don’t have any particular dwelling place (uru); the spot we reach will be our dwelling place (chellunna uru).”

Lord Shiva and Goddess Parvati continued on their way, followed by the fisherfolk, finally reaching a spot where they stopped. As Lord Shiva stood facing east and Goddess Parvati faced west, the two became transformed into stone images. Chelluruna uru (the place reached) later became Chenganoor of the present day.

In time a temple was constructed and daily worship was begun, when something very strange occurred. Whenever water was brought to the sanctum sanctorum to perform the worship, the priests found a fish in it. This made the performance of the daily worship impossible. In order to find a solution, the temple authorities made an astrological calculation and discovered the whole story of Lord Shiva, Goddess Parvati, and the curse of Lord Subramanya. The astrological forecast further revealed that the marriage ceremonies of the old man and the princess had never been conducted. According to the custom, the people of the Alappad coast, where Goddess Parvati had been born as a fishermaid, should come with dowry and other marriage presentations to Chenganoor in order to conduct the marriage. Subsequently the necessary preparations were made in Chenganoor and Alappad. The villagers of Alappad duly assembled the paraphernalia and travelled to Chenganoor to conduct the divine marriage ceremony. To this day, every year during the festival season, this custom is followed in memory of the ancient legend. The temple still remains a centre of attraction to thousands of devotees.

A few decades ago an interesting incident took place in connection with this story. One year the people from the Alappad coast did not participate in the festival by observing the customary rules and preparation, thinking it meaningless and wasteful to spend a lot of money to travel all the way to Chenganoor. They thought, “Why should we cooperate in a festival which is conducted in a distant place?” Mysterious happenings immediately took place in the Chenganoor temple.

The decorated elephant that was to carry the Lord’s idol in the procession stood still, refusing to take even a step. All efforts to make it move failed. Word was immediately sent to Alappad of this inauspicious occurrence, but too late. Smallpox had already broken out there. Realizing their foolish mistake and with deep remorse, the villagers made their way to Chenganoor without delay, bringing all the preparations for contributing to the festival according to the custom. Such is the ancient lore that is intimately interwoven with this coastal landscape and its people. Is it a wonder then that this sacred place has again become centre stage for a divine drama?
******

2 Another name for Sri Muruga, the brother of Sri Ganesh.