Parliament of World’s Religions in 1993 , Chicago

Amma’s speech was like the flow of the Ganges. From the highest peak of transcendent spiritual bliss, Amma spoke, letting others drink, bathe and swim in Her infinite consciousness, which overflowed through Her beautiful and compelling words. 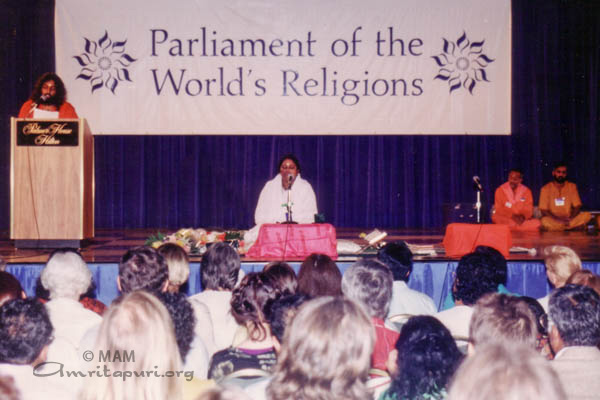 As Amma spoke, a deep peace seemed to permeate the atmosphere. Her speech was intellectually convincing, and at the same time it had a tremendous healing power, a great purifying effect. For one hour people sat enthralled, and when the speech came to an end, there was an outpouring of emotion which saw journalists in tears and complete strangers leaving their seats to come up to Mother. Hearts overflowed as people spontaneously rushed towards Amma to have Her darshan. It was a great and unforgettable occasion. In Her own inimitable way, Mother, having dispensed with the formalities of talking, was now giving darshan.

People made their way forward, drawn like magnets towards Mother, yearning to share in this divine spirit which had so utterly touched them and inspired them. Mother greeted as many people as She could, tenderly embracing them one after the other.

John Ratz, a Public Relations Counselor, while reflecting on the impact of the speeches delivered during the Parliament sessions, made this insightful observation “Every other speaker had treated the subject of religion and spirituality as if they were two disparate entities. However, Amma’s powerful words struck deep into the center of religion and spirituality, effacing the contradictions, bridging the gap and effecting a harmonious blend of both, thus unfolding their very essence. It was one of the most significant and powerful speeches.”

Whereas the first Parliament resulted in the acceptance of Jews and Catholics into the mainstream and a stirring introduction to the religions of the East, the second Parliament marked the growing recognition and influence of these other traditions and faiths. The Parliament provided a lucid example of an emerging religious pluralism