Once upon a time, Lord Brahma was flying through his creation on his swan. At one point he was drawn by the beauty of a hill in what is today known as the Wayanad District of Kerala and decided to land there. (Thus the hill received it name “Brahmagiri.”) As he walked down the slope, he became exhilarated by the intoxicating fragrances, sounds and colours of the forest. Suddenly, in the middle of one particularly beautiful riverside grove, he saw a stunning, jewel-bedecked, idol of a four-armed god resting in a nelli tree (Amla Tree, Phyllanthus emblic). But as soon as Brahma saw the idol, it disappeared.

Overwhelmed by a combination of grief and shock, Brahma immersed himself in deep contemplation in order to get the vision once again. During that contemplation, Brahma realized that the idol was that of Lord Vishnu and the area he was strolling through verily Vishnu Loka. At this point, a disembodied voice confirmed his insight. “The image thou hast seen is that of Vishnu. The excellence of this area draws and keeps him here,” it said. The voice told Brahma to install the idol, and Brahma did so, calling it Sahyamalaka Kshetra.

Pleased with Brahma, Vishnu granted him boon, and Brahma requested Vishnu to abide eternally in this place and offer liberation to tortured souls. Vishnu consented and assured Brahma that the rivers of this place would always wash away the sins of all mortals, dead or alive. (Thus, the river is known as Papa-Nashini—the destroyer of sin.)

In fact, there is an unpaved area within the temple where Brahma is said to have conducted the temple consecration rites. To this day, the Brahmin priests who run the temple set up all the puja items afresh at night, so that Brahma can come down and perform his worship each night.

During the Pandava’s 13-year period of exile from their kingdom, they lived for a time hills around Brahmagiri. It is also believed that Sri Rama offered prayers at the Maha-Vishnu temple here during his search for Sita. As such, it is a popular temple for making offerings to one’s forefathers. (Hence it is known as “the Kashi of the South.”)

Tirunelli is located about 30 kilometres to the northeast of Manantavadi, where Amma has an ashram and Brahmasthanam Temple. 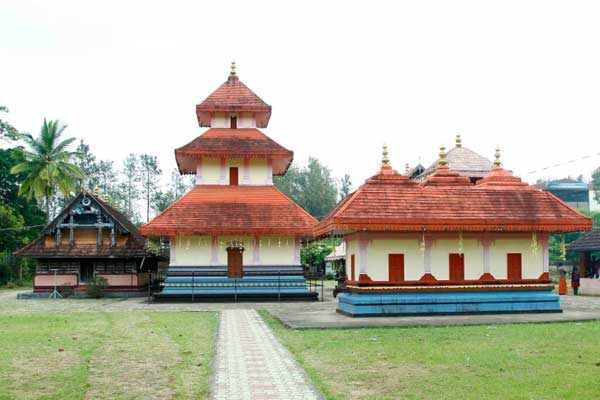 According to the legend, Sita used pul [grass] taken from here for palli-kolluka [taking rest] during the time when she was sent away from the palace of Lord Rama. Thus Pulpalli gets its name. The primary deity of the Pulpalli temple is Sita Devi, which is quite rare. It is believed that Sage Valmiki, the author of the Ramayana, lived southwest of Pulpalli at Ashrama Kolli 1, and that Sita was staying there during her period of exile. The Sita Devi idol at Pulpalli is known as “Jadayatha Amma,”or “The Mother Who Lost Her Matted Lock.” The story goes that Sita was so aggrieved that Rama had sent her to the forest that she prayed to her mother, Bhumi Devi [Mother Earth].2When she prayed thus, the earth split in half and she entered inside. The only trace of her left behind was one matted lock lying on the ground. It is said that the tears that fell from Sita at that time formed a river—Kannaram Puzha. Furthermore, although Wayanad is famous for its leeches, there are none in Pulpalli. The belief is that this is due to the purity of Sita Devi’s tears.

The second idol at the Pulpalli Temple is called Murikkanmar. It is of Lava and Kusha, the children of Sita and Rama. Lava and Kusha, were brought up like muni-kumara [ascetic children]. (Over the years muni-kumara slowly became “Murikkanmar.” It is believed that they learned kalari [Kerala martial arts] at a hillock on the bank of Kannaram Puzha. Today the hill is called Sasi Mala—short for Sishukal Kalicha Sthalam, which means “The Place of Children Playing.”

Another interesting fact about Wayanad is that it is the only district in Kerala where the Jain religion still has a presence. The Jains came over the hills to Wayanad from Karnataka in 12th century to escape persecution at the hand of Muslim kings.

1 There is a group in Wayanad District that is working to reconstruct Valmiki’s ashram and temple on its original site. In the early 1990s, at the group’s request, Amma laid the foundation stone for this construction.

2 As a baby, Sita was found by farmers while they plowed a field in the kingdom of Janaka. Thus she was considered Bhumi Devi’s daughter.