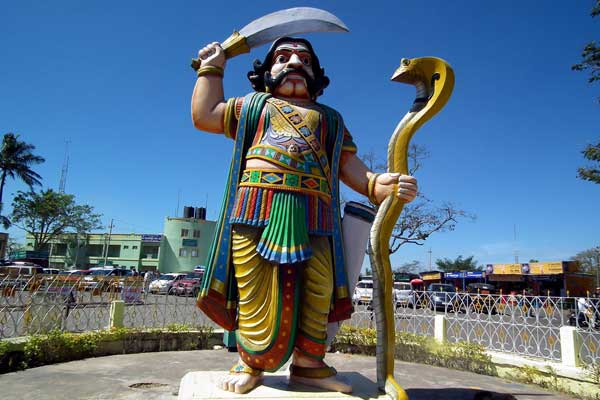 Mysore is really named after a demon—Mahisha Asura. Originally, the city was known as “Mahishuru,” which means “Mahisha’s City.” Gradually, it came to be called Mysuru, which was later Anglicized to Mysore.

Mahisha is Sanskrit for “buffalo” and an asura is a type of demon. Mahisha Asura was a demon who could switch back and forth between human and buffalo form. It is said that he was the son of an asura king named Rambha who consummated his love with a buffalo. The resulting child, Mahisha Asura, was a changeling who could shape-shift from human to buffalo and back again, as well as into other bestial forms. He terrorized the devas [demigods], and thus they pleaded with the trimurti of Brahma, Vishnu and Shiva to help them. Because Mahisasura was blessed with a boon that prevented him from being killed by a man, Devi came forth to set thing right.

In fact, Mahisha was so overwhelmed with Devi’s beauty that he wanted to marry her, but Devi was not interested. She only wanted his blood in battle. Armed with the weaponry of the trimurti and riding a lion, Devi single-handedly destroyed all of Mahisha Asura’s minions and finally, after an epic battle, cut off his head.

The Puranas are full of different versions of this story. Devi has thousands of names, and so do the demons she comes down to destroy. You will find these in the “Devi Mahatmya” from Markandeya Purana, the “Lalita Sahasranama” of Brahmanda Purana, the Devi Bhagavatam and many other sources. One of the most beautiful versions of the slaying of Mahishasura comes from Adi Shankaracharya’s “Mahishasura Mardini Stotram.”

Although the telling of the story varies in specifics, the essence is always the same—divine qualities triumphing over the demonic. (In fact, buffalos are a symbol for tamas—the quality of dullness, lethargy and darkness.)

According to legend, Mysore was the city of Mahisha Asura, and it was near the top of a 1,000-metre hill here called Chamundi, that Devi slew him. Thus Devi gets names like Mahisha Asura Mardini [The Slayer of Mahisha Asura] and Chamunda Isvari [The Goddess of Chamunda].

If one climbs the 1,000 steps to the top of Chamundi Hill, one will find not only the Chamundeswari Temple, but also a massive statue of Mahisha Asura—with a snake in one hand and a dagger in the other. At the 800th step, there is also a 15-foot high and 24-foot long granite statue of Nandi, the devoted bull ridden by Lord Shiva.