Usually when Amma is about to arrive at one of these big outdoor programs, all faces are turned towards the far end of the center aisle of whatever huge space or pandal has been arranged. Music is playing, and a long carpet has been rolled out for her to walk along, greeting her thousands of children. When she reaches the stage, she’ll mount the few steps, then step onto her peethom, and greet the crowd, hands above her head, saluting the divinity within each of them, all of them.

This is how it was yesterday in Cherukolpuzha, except for two small details: the peethom wasn’t in place. Nor was the brilliant gold-coloured carpet.

They had been, but suddenly, just few hours before Amma was due to arrive the rain started.  Not one of those soft, cooling, refreshing brief sprinkles one expects in this non-monsoon season. No: it was a complete and drenching downpour! 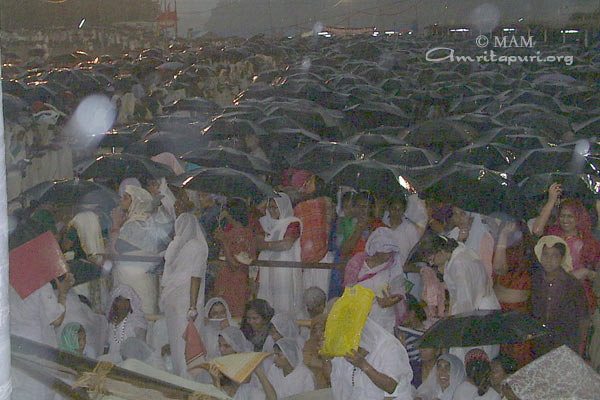 Out in the crowd, umbrellas opened, sitting mats and plastic chairs were raised over heads, even the huge blue plastic tarp the ashramites would normally be sitting on was instead lifted high over their heads, arms acting as tent poles!

And the carpet and the peethom–where were they?

The carpet had been rolled up and stashed away; the peethom had been moved further back on the partially-covered stage to be sheltered–after all, Amma would sit on it for at least 6-8 hours this night, first for the formalities of the program, then for her satsang, and bhajans–and then, her trademark: darshan. 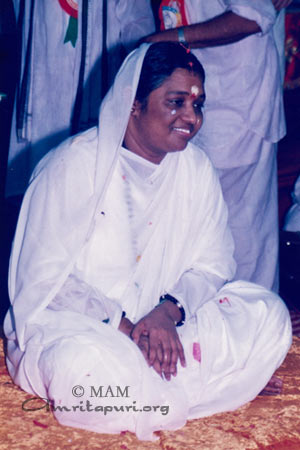 Nobody wanted Amma sitting on a wet peethom for any time at all, never mind many hours! ‘Maybe she wouldn’t even come–this was an outdoor program, with little or no shelter either for people on the stage or for the crowd of thousands. Maybe it would just be cancelled’, thoughts flashed through many minds.

But Amma arrived during the downpour, and sheltered by their own ingeniousness or not at all, the people crowded to the edge of the center aisle to watch her walk the distance–not on a golden carpet but on a jute runner–smiling, greeting, as always. Of course, she had an umbrella–but then, she always does: the ceremonial one that is always carried, rain or shine, when a person of her stature is formally processing. This time, however, from its red surfaces and golden tassels, water cascaded down–maybe tirtha for those it fell on.

By the time Amma reached the stage, the rain had begun to let up a bit. She turned, wiping water from her face, and greeted her children out there in the rain. She prostrated, and sat, quietly radiating peace, oblivious to the white flower petal the rain had plastered to her cheek.

The formalities could be performed more or less normally. Amma greeted the guests on the stage, and listened whiile dignataries spoke, and then she lit a lamp to inaugurate the conference – the 88th  Ayroor-Cherukolpuzha Hindumatha Maha Sammelan.

The rain actually stopped during Amma’s satsang, but came back in force during bhajans; both went on “as usual”–rain or no rain, Amma simply does what she does.  Because the stage roof was leaking the musicians had to move around the harmonium and tabla several times !! 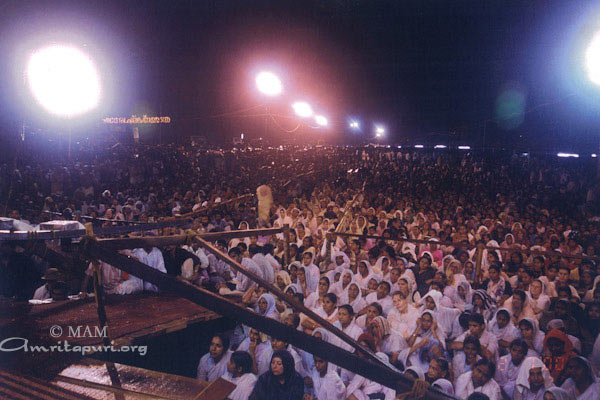 Next would come darshan–for how ever many hours it might take for the thousands who wanted the embrace of the Divine Mother–for the crowd was still huge; the devotees, too, had not been discouraged by the rain.

To give darshan, Amma would sit right at the edge of the stage–would the rain stop? 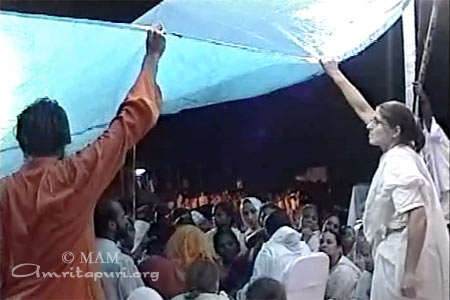 No. And of course Amma didn’t stop either; she went right on hugging, and someone raised the ceremonial umbrella over her head. Not for long! When she saw this “partiality” (for after all, her children were not sheltered as they stood in the long queue to approach her) she waved away the umbrella.

A woman behind Amma reached forward to lift Amma’s sari to cover her head–surely that would be acceptable!  Not for long!  In less than a minute, Amma had pushed the rain-gear-sari from her hair, and was joining her devotees in getting drenched.

It was only when some brahmacharis and volunteers began raising a blue plastic tarp to protect not only Amma  but everyone near the stage, that she agreed to be shielded from the rain. And even then, always the concerned and watchful mother, she was multi-tasking: the hugs went on, the murmurs, the listenings, the connection with eyes—and at the same time she was watching the raising of the tarp, and more than watching: directing! One begins to understand the many arms and hands of the Hindu deities.

This mahatma really is like a mother, forgetting herself, concentrating on the needs of her children; spending herself without counting the cost–for us, who so often are…not like that.