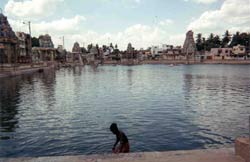 Kumbhakonam and the surrounding villages are linked together through via a wondrous story regarding this particular cycle of creation.

During the cosmic deluge of pralaya, Brahma prepared himself for the next cycle of creation. He put all the seeds from which creation would sprout in amrita [the elixir of immortality] and kept them together in a clay pot. On top of the pot, he placed a coconut with mango leaves and wrapping around the pot’s neck a sacred thread. He then placed the pot on the peak of Mount Meru in the Himalayas.

With the cosmic deluge, the pot came floating down from Mount Meru as per Brahma’s plan. Ten kilometres from Kumbhakonam, the coconut was dislodged and fell into the water. Instantly the waters cleared there, revealing land. To this day the God worshipped there is Narikel Isvara [narikela means “coconut”].

The mango fell off 10 km northwest of Kumbhakonam, and there the waters also immediately receded. That place is called Tiruppurambayam, which means “outside the waters of the deluge.” [Payam (or bayam) is payas or “water,” but in this context it means “deluge.” Puram means “outside” or “beyond” something.]

Then, the sacred thread [sutra] unravelled from the pot and fell off. The deity in the place where the sutra fell is called Sutra Natha—Lord of the Thread.

Brahma watched all these events transpire. There was only one problem. The pot with the amrita and seeds of creation had failed to overturn in the flood. Brahma then fired off an arrow, breaking the pot. The place where Brahma shot the arrow used to be called Banapuri [“City of the Arrow”] and today it is known as Vanattirai. The deity worshipped there is called Banapur Isvara.

The kumbha [pot] which held the amrita and seeds had both a “nose” as well as a “mouth.” In such a pot, water is poured in through the “mouth” and out through the “nose.” The spot where the mouth of the pot broke is called Kudavayil [now known as Kudavasal]. It is 20 km southeast of Kumbhakonam.

Brahma wanted the amrita to be discharged from the kindi in a proper manner. According to the scriptures it should come through the kindi’s nose. And this is what happened. And the place where the nose broke and the amrita fell is the most holy of all these places. It is called Kumbhakonam [kon (konam) meaning “nose.”] Here, the clay pot itself came to be the linga; even today is like that. Kumbha Isvara is the name of the god in the temple.

The maha-maham bathing tank there—which covers an area of 6.2 acres and has a depth of 10 feet—is said to be the spot where the amrita fell. Every 12 years there is a nine-day Kumbha Mela, wherein millions of people come to bathe in these waters as a rite of purification.