In Ahmadabad1, on the banks of the Sabarmati River is a place called Dudheshwara. This is said to have been the ashram of a great rishi [sage] by the name of Dadhichi [also Dadhyancha2]. Different versions of Dadhichi’s story are mentioned in a number of sacred texts, among them Rg Veda, the Srimad Bhagavatam, Srimad Devi Bhagavatam, and the Mahabharata.

According to the legends, Dadhichi was a master of a Vedic rite known as the Madhu Vidya3, through which one can obtain relative immortality in Brahma Loka, the highest heaven. There was only one problem. Indra, the king of the devas [demigods], was very fearful of losing his position. He was worried that if one learned the Madhu Vidya, such a one could easily usurp his exalted position. Thus he cursed the science, saying that he would decapitate anyone who taught it. However, when the Ashwini Twins—two devas in the form of children—desired to learn Madhu Vidya and they approached Dadhichi. They had a plan to circumvent Indra’s wrath. They themselves would cut off Dadhichi’s head, preserve it and replace it with the head of horse. Then when Indra cut off Dadhichi’s horse head, they would replace it with the original. Dadhichi agreed, and everything went as planned. 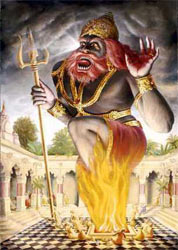 But the story does not end there. Later on, the devas were being terrorized by a demon named Vritra Asura. No one could stop him. He quickly dethroned Indra and chased him out of heaven. Indra ran to Lord Brahma and asked for his help. Brahma said that Vritra Asura could not be killed by normal weapons. The only thing that could kill Vritra Asura was a spear fashioned from the spine of Dadhichi Rishi.4

Indra went to the banks of the Sabarmati and asked Dadhichi for this favour. Despite the fact that Indra had once cut off his head, Dadhichi did not hesitate. He said, “This body will anyway wither away one day. If it can serve some useful purpose, so be it.” The rishi then drew up his prana [life force] and vacated his body. After animals ate away the body’s flesh, Indra took Dadhichi’s spine and made the specified weapon—the Vajra Ayudha.

The battle between the gods and Vritra Asura lasted 360 days, but in the end Indra slew the demon and regained his throne.

Dadhichi’s willingness to sacrifice himself numerous times for the benefit of the world is the real point of this story. His response to Indra reminds one of Amma’s saying, “The body will one day wear out one way or another. Better to let it wear out from use for the benefit of mankind, than to allow it to simply rust away.”

1 Ahmadabad was originally called Karnavati. It is also known in colloquial Gujarati as Amdavad.

2 In Panoli’s grammar treatise, he explains how dadhyancha can become dadhichi.

3 The Madhu Vidya is enumerated in a section of Brhadaranyaka Upanishad called “Madhu Brahmana” (Brhd. II.5).

4 According to some versions of the story, the reason why Dadhichi Rishi’s bones were so powerful is that, previously, when asked to safeguard the weapons.Dadhichi had melted down some of the gods’ weapons and drank them in molten form.