India is a land of festivals where you will see at least one major festival each month. Deepavali (or Diwali) which literally means “rows of lamps” is one of the four main festivals of India. Throughout the world, all Hindus celebrate Deepavali or Diwali with great pomp and enthusiasm. 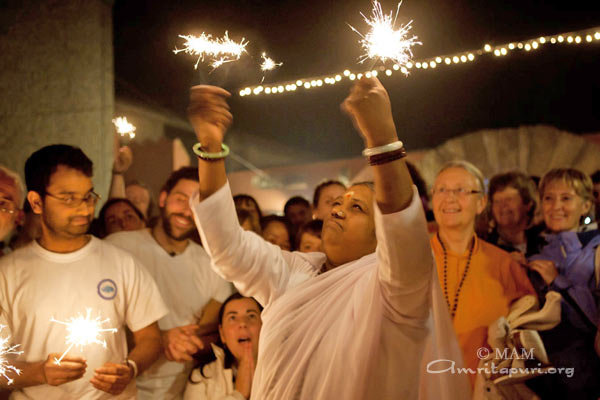 The celebration of Diwali lasts six days, beginning on the 12th day of the month of Kartik (as per the North Indian lunar calendar). The day before Diwali, in order to evoke the grace of God, women fast. It is not that God wants you to go hungry or takes pleasure in your suffering – the principle is that you gain only by giving up. That evening, devotees worship Gomata (the cow) and her calf and feed them special food. Women pray for the welfare of the entire family. This holy day is called Vasubaras.

The first official day of Diwali falls on the 13th of Kartik. People set about cleaning houses and shops, and decorating doorsteps and courtyards with rangoli or multi-coloured designs. They purchase gold ornaments, new vessels, clothes, and other such items. Devotees arise early in the morning before sunrise and take oil baths. If possible, they wear new clothes. In the evening, people worship coins representing wealth. Families decorate houses and courtyards with lanterns giving a warm glow to the night. This day of celebration is called Dhantrayodashi or Dhanteras.

The second day is called Naraka Chaturdashi. People take an oil bath in the early morning and then in the night they light lamps and burn firecrackers. People visit their relatives and friends, exchanging love and sweets.

On the third day, people worship Lakshmi, the Goddess of wealth. People decorate their houses with lit lamps and lanterns to welcome Lakshmi into their home and hearts. On this day businessmen close old accounts and open new accounts. The earth is lit up by lamps and the skies are coloured by the multi-hued lights of fireworks.

In North India, the Govardhana Puja occurs on the fourth day of Diwali. Devotees in the North build large mounds made of cow dung, symbolising Govardhana – the mountain that Krishna lifted up with his finger to save the villagers of Vrindavan from rain – and decorate and worship them. North Indians observe this day as Annakoot, or the mountain of food.

The fifth day of the festival called Bhaiyya Dooj celebrates unique and fun customs. Every man dines in his sister’s house, and, in return, presents her with gifts. North India calls it Yama Dwitiya. Thousands of brothers and sisters join hands and have a sacred bath in the river Yamuna.

Dhanteras
The scriptures mention the divinity called Dhanvantari emerging from the churning of the ocean holding a kalash (pot) filled with Amrit (ambrosia). Due to the fact that Dhanvantari, who revealed the science of Ayurveda to the world, first manifested on this day, all over India, doctors following the Ayurvedic system of medicine organise joyful celebrations during the annual Dhanvantari festival.

Naraka Chaturdashi
There is a legend about a king of Prag-Jyotishpur, named Narakasura. He was a powerful king who misused power to harass his subjects. Sri Krishna destroyed this oppressive asura king on this day. Unjustly imprisoned people celebrated their freedom with friends and family. The citizens celebrated their deliverance from Narkasura’s reign by lighting lamps.

Sri Rama
Deepavali falls on a no-moon day – in fact, the darkest day of the year. The illuminations and fireworks, joy and festivities, are to signify the victory of divine forces over the powers of darkness. On Deepavali day, triumphant Sri Rama is said to have returned to Ayodhya after defeating Ravana, the asura king of Lanka.

Goddess Lakshmi Devi
The Puranas say that it was on this day that Goddess Lakshmi, who emerged from the churning of the ocean of milk (Ksheera Sagara), married Lord Vishnu, the repository of all divine qualities.

Govardhana Puja
In order to shelter the gopis and gopas and their cows from the torrential rains sent by Indra, Krishna lifted a hill near Mathura called Govardhana with his finger and sheltered all the people for a period of seven days under it. By then Indra saw Krishna’s greatness and asked him for forgiveness.

Bhaiyya Dooj
The river Yamuna and Yama, the God of Death, were brother and sister. As they grew up they went their different ways. On this day Yama supposedly visited his sister Yamuna, who in her joy at seeing her brother after such a long interlude set up a feast for him. Pleased, Yama granted her a boon. He declared that every man that receives a tilak or vermilion mark on the forehead from his sister and presents her with lovely gifts on this day would attain higher worlds.

The dharma of fire is the same wherever it is: in a poor man’s house, in a rich man’s house, in America, in Antarctica, or in the Himalayas. It gives light and heat. The flame always points upwards. Even if we keep the lamp upside down, the flame will burn upwards. The message is that our mind should be focused on the Atman, the Self wherever we are. The lamps remind us of our dharma to realise our divine nature.

“The Self is pure consciousness which is self-luminous. The cognition of all objects arises from the light of pure Consciousness.” -says Bhrihadaranyaka Upanishad

One lamp can light several others. You can even light another 1000 lamps, and still, the flame and the light of the first lamp will remain as it is. By becoming manifold, the light looses nothing. The lights of Deepavali represent Brahman and creation. It conveys the message of the mantra:

The rows of lamps teach yet another important lesson of unity. The light that shines forth from the Sun, the moon, the stars, and fire is all the same. To see and recognise that one light, the light of consciousness, which is manifesting and pulsating in and through all of the creation is the goal of life. Thus, recognising all of the creation to be an expression of your true Self, spread the light of love and compassion.

The lights of Deepavali are displayed at the entrance doors, by the walls of houses, in the streets and lanes. This means that the inner spiritual light of the individual must be reflected outside. It should benefit society. Passers-by may thereby be prevented from stumbling on their way to reach their destination.

Feeding empty stomachs, lighting blown-out diyas and bringing light to those whose lives are in darkness is the true spirit of Deepavali. This is true prayer.