On International YogaDay, Amma shared her insights on the benefits of yoga {news}, while one of her disciples guided all attendees of her program in Santa Fe in simple yoga exercises. 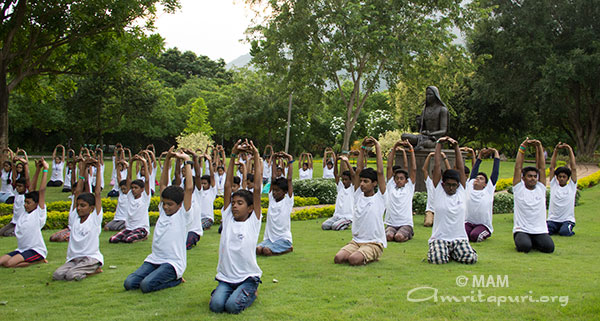 Special celebrations were held in honor of the first ‪International YogaDay At Amma’s Schools, Ashrams, Centers and ‪Satsang‬ groups all over the world. Special Yoga sessions were also held in the public places to raise awareness of the importance and benefits of yoga.

Amma‬has long demonstrated her commitment to preserving the tradition of ‪yoga‬ and making it accessible to all, with yoga having been taught for many years at her primary, secondary, and university-level educational institutions, (totalling more than 100,000 students nationwide) as well as through our annual Gitamritam Bhagavad Gita camp and through regular Amrita Yoga classes at Amritapuri and elsewhere.