This year marked Amma’s 25th visit to Japan. The three days of programs in Tokyo were celebrated by with many speakers and cultural performances.

Amma was welcomed by Mr. Abbagani Ramu, Counsellor & Director, ICC, Indian Embassy. Ms. Masako Watanabe, one of the local coordinators who was present when Amma first visited Japan, also spoke briefly. She recalled Amma saying that is was her ‘Japanese children crying’ that led her to come. 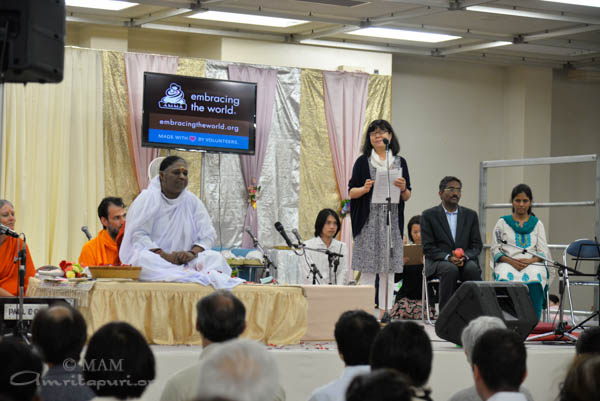 Throughout the programs, eight dancing and singing performances were given expressing gratitude toward Amma.

Two persons from Sendai city, which had been seriously damaged by the Great East Japan Earthquake in 2011, performed a dance to remember those who are still recovering from the disaster, and to express the feelings of those who could not attend the programs. It is said that this same dance was performed 400 years ago when a feast was held for celebrating the completion of the construction of the Sendai castle. At that time, stonewall masons had gathered from remote provinces to dance together and to celebrate the arrival of a time of peace.

The powerful performance touched the heart of the audience. With tears in their eyes they gave a big round of applause to the two performers.

One of the two from Sendai recalled the memory of Amma’s visit back in July 2011 when she visited a refuge city in Sendai {news}. Amma had gone to the beach and walked to the edge of the sea praying for the souls of those who had perished, and paying respect to the ocean and Mother Nature. “It was unforgettable memory.” 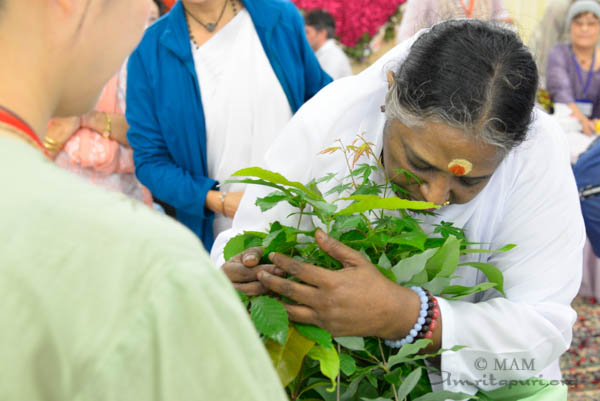 On the last day of programs, former Indonesian First Lady and TV celebrity, Dewi Sukarno, shared her impressions about Amma’s darshan in her blog. “I directly experienced ‘unconditional love’. I might say that it was such an experience as one basks in the emotion which is beyond description.”

At the end of Devi Bhava, as Amma concluded her this years program, she was presented with books full of thank you letters. Amma then blessed 25 Tulasi saplings — one for each year she has visited Japan — as a symbol of the love and concern for the environment, which will be planted in Amma’s Ashram in Tokyo.