On April 11th, 2015, seventy blind children and youth from Thika Primary School of the visually impaired received white canes as part of AYUDHs ‘White C(r)ane Project’. Initiated by blind AYUDH member Matthias, from Germany, youth across Europe had spent the past eight months raising funds to sponsor the project. As a representative of Embracing the World, Br. Shubamrita handed over the 70 canes during a special ceremony at the school, as the first phase of the Project. Speaking words of encouragement to the students, Shubamrita reminded the children that with an inspired inner vision and proper understanding of life, the children can reach the heights of success and happiness in life. He asked the children to pursue their dreams and ambitions, despite their physical challenges. 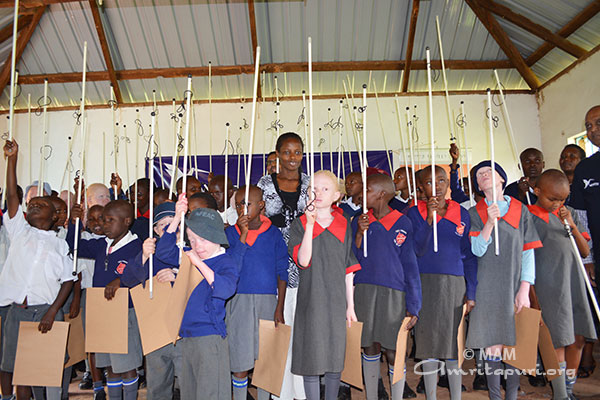 To advance the next phase of the project, Embracing the World volunteers will travel to the remaining schools for the blind in all of Kenya to look into the needs of children there and expand the project accordingly.

For days prior to the ceremony the blind children were composing and practicing a song, expressing their gratitude and appreciation towards Amma, founder and leader of the Embracing the World movement, as well as to the youth in Europe who showed their solidarity by raising the funds for the White C(r)ane Project. The song brought tears in the eyes of everybody present in the function.
– Dass