During the public programme in Amdavad, in Amma’s presence, the Chief Minister of Gujarat, Smt. Anandiben Patel, handed over certificates of encouragement to eight young women, acknowledging their completion of the 10th standard exams conducted by the National Institute of Open Schooling (NIOS). 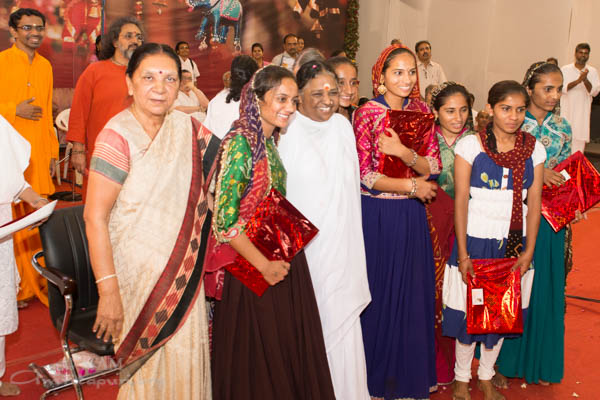 The recognition is notable since it marks the successful continuation of Amma’s humanitarian work in Gujarat. The Dagara village in Bhuj, where the girls are from, is one of three villages rebuilt by Ashram after the devastating earthquake in 2001 {news}. Ever since, the community has been receiving Amma’s continuous support for its overall development.

Recently, Dagara became one of 40 villages in 20 states to participate in an educational scheme of Amrita University which uses tablet-based education to tutor both children and adults . Previously, the village school only went up to 8th grade, but with the new computer-based education, students can now remain in the village and complete their studies up to 10th grade, allowing them to pursue a profession that will further support their families and aid in the development of the community. Up until recently, because of safety concerns, parents would not allow their daughters to leave the village for higher studies beyond 8th grade.

Meera, one of the graduates and mother to a two-year old child, enrolled in the programme after a gap of eight years from school. She had been eager to take up her studies again to attain a BEd (Bachelor of Education) Teachers Certificate. Meera said, “I want to be a teacher so that I can reach out to those who are deprived and help them move ahead in life.”

Shanti, another graduate, had resumed studies after a gap of two years. She now wants to become a nurse and serve in her community. The successful completion of the 10th standard will help her reach that goal.

The girls said, “We have classes every day from 2pm to 7 pm, with no holidays. We love to study and don’t feel bored at all . All our families are farmers. It is our dream to bring glory to our village by introducing new professions. Thank you Amma, for helping us achieve that goal.”

Present at the function was also Veji Ben, the Maths, English, and Science teacher for the students. She herself became the first girl in Dagara to complete a +2 (pre-university) degree, staying at her uncle’s house in the next village to attend the university there. Now she is proud to congratulate the first batch of female students from her own village who would otherwise not have had the same opportunity she had. “Most of the students want to take up arts. For science they will need a lab and other facilities,” says Veji Ben.

The girls presented a Kutch dance dressed in traditional costumes for Amma.

After they had spent the whole night at the venue with Amma, the girls remarked, “We had known about Amma since she rebuilt our village. But now that we see her we don’t want to leave her presence, we want to live with her.”

This is just one of many stories of how Amma’s sustained humanitarian outreach transforms entire communities and empowers a new generation to uplift not only their own families, but society as a whole.