8-10 Nov, Milano, Italy – Europe Yatra 2014
A huge group of volunteers waited for Amma to welcome her on her arrival in Malpensa Fiere in Milano, which was the venue for Amma’s programme in Italy from November 8 to 10. On arrival, Amma straight away went to the Dining hall to serve food to all her children present, answered their questions, and sang bhajans with them. In response to the question of a devotee, Amma said, “We should introspect at the end of each day and ask ourselves, “Did I go out of my way and help somebody? Was I selfish in my actions or was I able to maintain a selfless attitude? Did I hurt anybody with my words and actions? Was I mature with my emotions?” These are questions that will help us to gauge our progress and help us make resolutions for the next day. My children, never lose your awareness of the goal. If the awareness stays with you, you will never be distracted by anything in the world.” 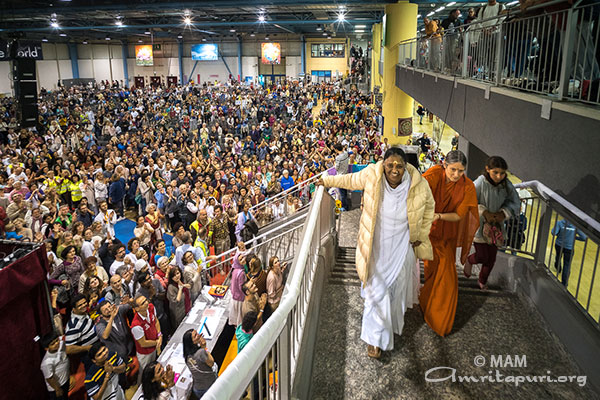 It was a sight to see as Amma walked into the hall each morning and left in the early morning hours the next day, as the whole crowd would burst into applause with shouts of “Grazie Amma.” There were also groups of people from Greece, Russia and Israel that had come to Milano to see Amma. They had prepared songs for Amma that they sang in front of her, which enthralled everybody. They all held banners asking Amma to visit their country. They even learnt the phrase, “Amma, we are eagerly waiting for you” in Malayalam, which they said to Amma as they had their darshan.

On the third and final evening of programs in Milano, the overflow hall was also packed to capacity. As Amma got up from her seat in the morning hours of the 11th, the main hall was still full, and it seemed that no one had left. As she got down from the stage, and walked towards the camper to drive to the next destination, hundreds of devotees stood on both sides, full of yearning for one last glance from Amma. If there is a word missing from Amma’s dictionary — it is the word ‘rest’.