Hall Saint-Martin in Cergy-Pontoise was overflowing with people as Amma walked into the hall on the morning of the 19th October for her 2014 Paris programs. On the first day, darshan went from 11 a.m. on the 19th till 2:30 a.m. on the 20th. Amma’s boundless love and patience are something that is always a wonder. In Paris, the patience of the people waiting for their turn to see Amma was also remarkable, as many waited till the wee hours of the morning for darshan. 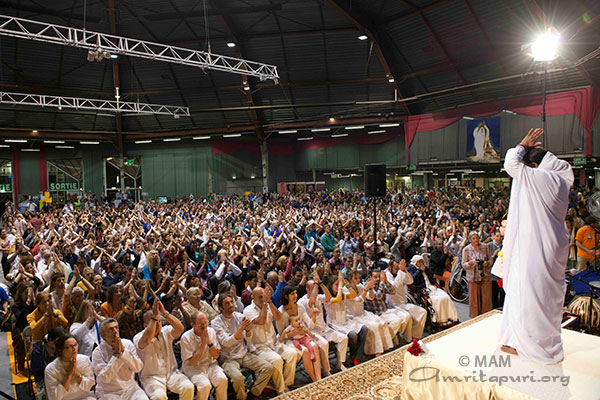 On the second day evening, there was a special function organized to launch Maisons Seniors, Embracing the World’s first elder-care home in Europe. Martine Reicherts, European Commissioner for Justice, Fundamental Rights and Citizenship, was the chief guest for the evening. Launching the project, Ms. Reicherts reflected on Amma’s significance as a role model in today’s world. “For me, Amma is a saint; Amma is pure love,” she said. “But she is not only in the religious world; she is in the world as we know it. She is an example for us all, especially for us ladies.”

Actress Helene De Fougerolles also participated in the event and released the French translation of the book The Colour of the Rainbow authored by Swami Amritaswarupananda.

During Amma’s darshan, there were amazing musical performances by eminent artists from all over France, ranging from India Carnatic music to jazz. As Amma concluded darshan at 11:00 a.m. on the 22nd, the hall was still packed to capacity. Amma then led everyone in a Diwali peace prayer, chanting Om lokah samastah sukhino bhavantu, praying for the light of peace and happiness to dawn in the hearts of everyone in the universe.

When Amma was about to leave the stage to get in her camper to drive to her next programs in Holland, the devotees all wished her Happy Diwali, flashing their mobiles to create little “candles” of light. It was such a beautiful sight to see.

Suggested: Read a blog from Paris here – “If it weren’t for Amma, I wouldn’t be here”.