The next stop on the tour was Eulachhalle in Winterthur from October 15 to 17, 2014, where Amma was accorded a grand welcome on her arrival. She served food to all the devotees present that evening, also enlightening them with her spiritual wisdom. She reminded the devotees, “Never waste away the time in hand. Don’t think that it is easy to contemplate on the Divine in the final moments of one life. Only if we have invested time and energy in such thoughts from a young age, will they come to our mind towards the end of one’s life.” 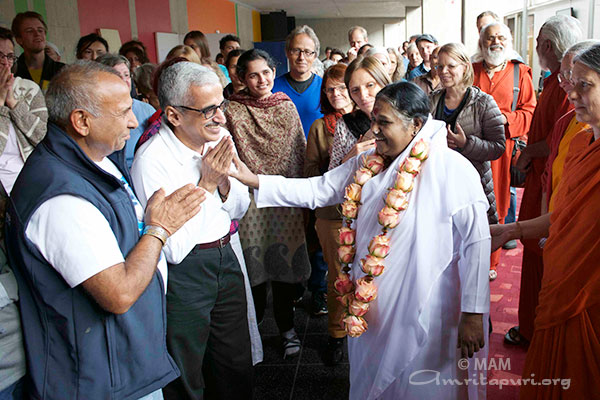 On the second day evening, the introductory talk was given by Olympic Bronze Medalist Anja Stiefel (Swiss Women’s Ice Hockey Team, Sochi 2014). In her talk, referring to Amma as her role model and inspiration, Anja said, “Amma is everywhere where love and happiness is. When I can feel the love on the ice, I move in ways that are totally extraordinary and I can’t even explain. And then I know, Amma is with me on the ice.” She also related how Amma has given her strength to carry on with her efforts despite all the challenges that she has faced. At the end of the talk, she handed Amma the medal that she received, which Amma lovingly kissed and put it around Anja’s neck. 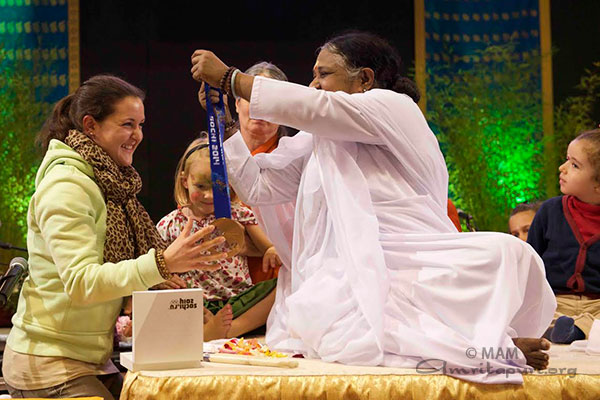 On the third day, the overflow hall was also packed as people from all parts of the country thronged to take part in the prayer for world peace led by Amma. The headlines of the French newspaper in Switzerland ‘Le Matin’ carried the news of Amma’s programme.
In her talk, Amma said, “What the world needs today are warriors who have awakened the power of love, becoming brave and fearless. This doesn’t mean that one must wage a war and defeat someone, capturing their wealth and kingdom. On the contrary, the quality of leadership should bring about transformation, because that is what this world is thirsting for.”

As Amma walked to get into the camper to travel to Paris for the next programme, one could see the eyes of the devotees moist with tears of love and gratitude as the air filled with the call of devotees, “Danke Amma (thank you Amma).”