Addressing the gathering, Ms. Elworthy, who is a three-time Nobel  Peace Prize nominee and the recipient of the 2003 Niwano Peace Prize, praised Amma’s humanitarian initiatives and youth groups. She said, “I observe two phenomenon happening in our world. On the one hand, humans are stripping the earth of its natural resources so fast that entire ecosystems are collapsing. On the other hand, humans are waking up to an entirely new perception of how the universe functions. And the most powerful forces in that direction, in my experience, are, first of all, the empowerment of women to share with men the responsibilities of decision-making and, secondly, the energy, alertness and skills of young people who have moved from ‘me’ to ‘we.’ They care less about how much they have and more about how much they can offer. And these forces are gaining impetus fast, profoundly inspired and encouraged by Amma’s work. … Amma’s huge heart plants compassion like a seed in the hearts of others, and that is how this huge army of volunteers changes the lives of hundreds of thousands of people.” 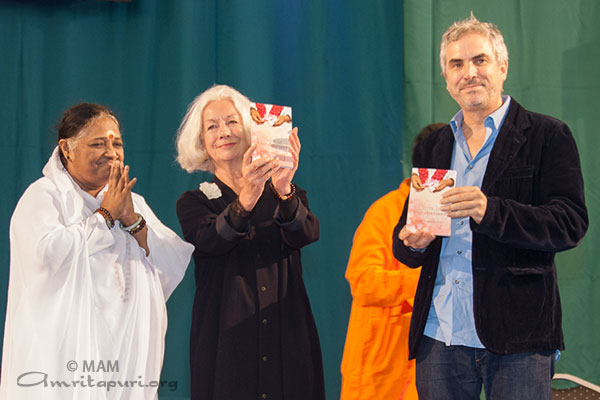 Lord Stone also addressed the gathering, sharing developments in the House of Lords in specific and in the U.K. government in general that he attributes to inspiration he took from his 2013 meeting with Amma. “We’ve created an all-party Parliamentary group on mindfulness. In the last year 115 Lords and MPs and staff in the houses of Parliament have done an eight-week mindfulness course. And with the blessing of the Cabinet, we are now developing a strategy for the U.K. that would have mindfulness in schools, mindfulness in the health service for mental and physical, mindfulness in the criminal justice system for offenders and victims and the police, and mindfulness in government and business. So, ‘it was Amma’s hug that started that off.””

Finally, director Alfonso Cuarón, best known for his 2013 film Gravity, which won seven Academy Awards including Best Director, addressed the gathering. He said, “I first met Amma two years ago here in London and was more than inspired by her, also by all her humanitarian work that keeps on growing year after year. Amma has touched millions of people’s lives the world over, and her tireless efforts to make the world a better place through her message of love and service are one of the wonders of our time. Spending time with her offers us the opportunity to reflect on our own progress to become better human beings and to ensure that we are moving in the right direction—the direction of peace and love. Thank you, Amma. Thank you for coming to London and setting an example for what is possible. Thank you.” 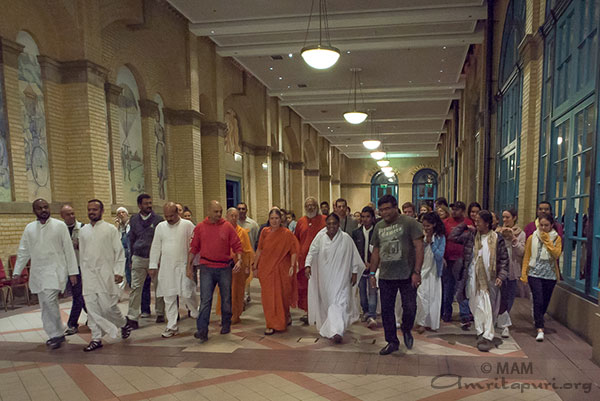 The three dignitaries officially released in the U.K. two new books published by Amma’s Ashram—one by Swami Paramatmananda Puri and one by Swamini Krishnamrita Prana. The formal program was concluded with Amma’s satsang, bhajans, and of course darshan.