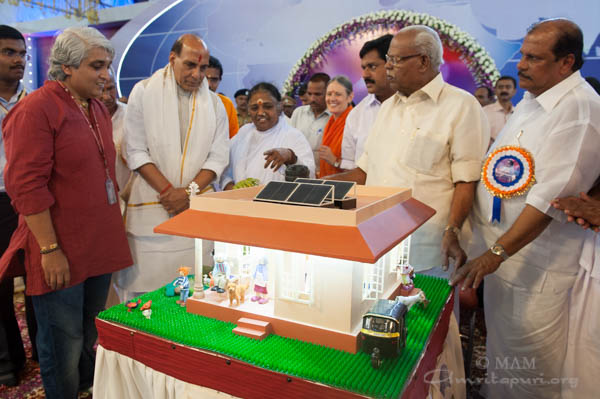 Amrita Centre for Nanosciences introduced Amritadyuti, the Solar Home-Lighting System during Amma’s 61st birthday celebrations. This low-costs system consists of three LED lights, a radio and a mobile-charger powered from a solar-power system. It has been designed as a package for Amrita Kuteeram homes and village hamlets (of 101 villages of Amrita SeRVe) so as to ensure them power even if they are cut off from the main power grid.

The Minister also unveiled Amrita Karshakan, a solution for farmers facing serious financial problems with regard to receiving fair compensation for their produce. It enables farmers to trade using SMS, Web and mobile platform as well as kiosks. The system also helps beneficiaries getting locally grown produce at a fair price in an efficient way. This will be a major contribution in Amrita SeRVE’s 101 Villages project.