Question: Amma, it is said there is only one dharma [duty]—to realize the Self. But I seem to have so many dharmas—family dharma, office dharma, social dharma… Is there really only one dharma?

Amma: For a spiritual person, the goal of life is to know the Self. Otherwise, what is the difference between a human being and a worm? A worm also eats, sleeps and procreates—doesn’t it? If the left hand is cut, the right hand soothes it, applies medicine and wraps it with a bandage. There is no sense of “other” there. A spiritual person moves like this in the world, seeing other’s pain and joy as their own. If a 1,000 pots of water are placed outside, the sun will reflect in each and every pot, but there still is only one sun. Similarly, a spiritual person understands that there is but one Self reflecting in each and every being. 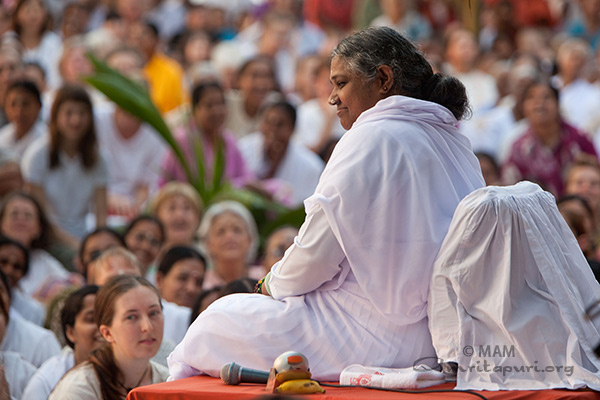 Lower emotions may arise, but try to overcome them through effort and prayer. If you can do that, then your only dharma is spiritual liberation. Liberation is not something to be gained after death. It is something to be experienced even when you are alive.

A spiritual person understands the nature of the world, the nature of relationships and the nature of the mind. Even people who marry Miss Universe sometimes get divorced. When she got married, many suitors were sad. Then, when she is available again, they are happy. But the fellow who married her, he is happy once the divorce is finalized.

So, happiness is not in the object. A spiritual person understands such truths.

Whatever dharmas you may have, whatever you may do for a living, your goal should be Self-knowledge and Self-realization. Strive for this. Be sure that your actions are never harmful to others.

Understand that everything is the Self and serve others. In order to purify the mind, selfless service is required. Then, grace will come to you. The impulse to help others is a higher state of mind. The beginning and end of spiritual life is compassion.

Have the attitude: “I am just an instrument; God is working through me. Whatever is needed will be provided by the Him.” Do all your actions—be it cleaning a gutter, taking care of your parents or social service—as worship. Accept everything that comes as God’s grace. In order to live like this, you must carry the flashlight of Self-awareness. In reality, nothing exist other than the Self.