Br. Shubamrita Chaitanya visited Kenya from April 22nd to April 29th, 2014. During his stay, public talks were held at the Balaji temple auditorium and the Langham Court, during which he spoke on the topics ’Living Fearlessly’ and ’Living a Life of Purpose’. Both programmes attracted packed audiences, who thoroughly enjoyed the talk, devotional singing and guided meditation. 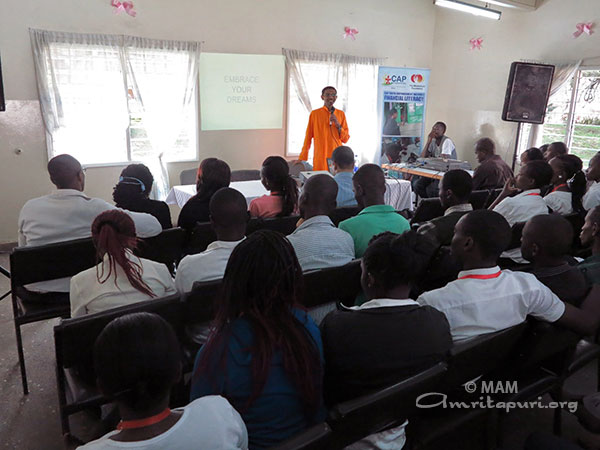 Mr. Yogeshwar Varma, the High Commissioner of India, was the chief guest at the Langham Court. Addressing the gathering, he profoundly thanked Amma and Amrita Center Kenya for their tireless efforts to spread spiritual values in the country of Kenya and their ongoing commitment to providing services for the poor and needy, regardless of their religion, ethnicity or social background.

On April 23rd, Shubamrita addresed 120 young Kenyans who are currently undergoing vocational training at CAPS Youth Empowerment Institute Training Center in Bururburu. The session was entitled ’Embrace Your Dreams’ and he invited the youth to reflect upon their personal ambitions and conceptualize concrete steps towards leading a successful and purposeful life. 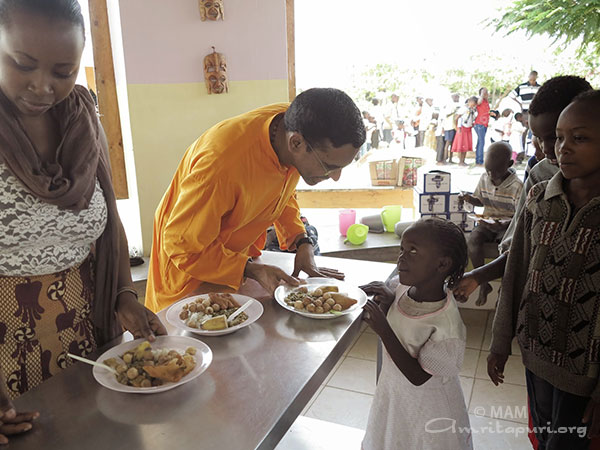 Upon the invitation of Hon. Moses Akaranga, the Governor of Vihiga County, Shubamrita give a talk to the executives in the Government on Social Governance and Leadership.

Amongst those who were waiting most eagerly for Swamiji’s visit were the 110 children at the Amrita Watoto Boma, the Children’s Care home in Athi River. The students proudly told him about their academic achievements and then spent informal time with Swamiji, singing and dancing and all the time repeating one question: “When is Amma going to visit us?” The permaculture project in the premises of the Children’s Home has seen a healthy expansion, providing organic food for Amma’s children and turning the Home into a beautiful park of lush green vegetation. A greenhouse has been erected to provide even more nutritious vegetables to the children and staff. Every Sunday, more than 200 children from the surrounding informal settlements were invited to the Home to receive free food and snacks.

On April 28th, Br. Shubamrita launched the second free eye-surgery camp held by M.A. Math Charitable Trust, in conjunction with Vision Beyond Borders and Nairobi MJF Balaji Lions Club. 1,372 patients had been screened across the country, out of which 120 were diagnosed with a severe cataract condition that leads to blindness and subsequently received a free cataract surgery at Athi River Shalom Community Hospital. A group of seven doctors and nurses from Spain came to volunteer for one week to do the surgeries. In December 2013, the Shalom Hospital became a partner of the Telemedicine Project with Amrita Institute of Medical Sciences in Kochi, India, receiving free consultations from highly specialized doctors.

It was really inspiring to see Amma’s love and compassion spreading across this beautiful country through the various activities and projects. Though far away physically from Amma, the volunteers of Amrita Kenya are so close to her in spirit, as they try to live Amma’s message through these projects initiated there.