It was the day before Amma would leave on her two-month Japan-North America Tour. Amma was meeting all the ashramites in the Kali Temple for a final meeting. After addressing several administrative- and seva-related matters, Amma suddenly raised a question: “What is the relevance in doing puja?” Apparently, someone had made a comment that puja [ritualistic worship] was not necessary in an ashram where the focus is atma-vicara—contemplation on the Self. 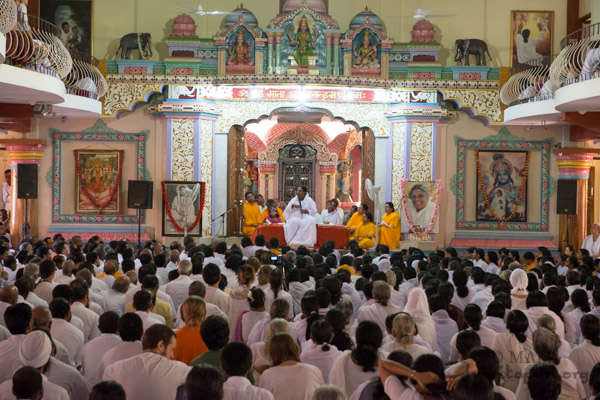 Amma said, “When we are children, we learn what a parrot is by being referred to a picture. Once we learn, the picture is no longer required. Similarly, every learning process has multiple steps. So, puja is yet another way to focus on the universal consciousness.”

Amma then asked some brahmacharis who perform puja as a form of selfless service to speak from their experience. One of them said that Amma had always told him that it was the attitude with which he performed puja that was the most important thing. “Doing puja with the right attitude brings happiness to both the pujari and to the one who has requested the puja,” he said. “When we perform puja, we begin with samarpanam—where we dedicate the worship to the universal consciousness. When we perform puja in this manner, we find that stillness of mind is created. Even in ashrams solely devoted to studying Advaita, puja is accepted as a step to obtaining mental purity.” 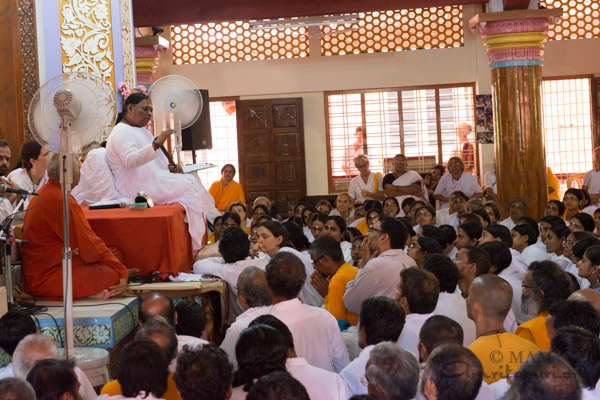 “That’s correct,” Amma said. “Advaita is the foundation. “Even Sri Sankaracharya, who propounded Advaita, consecrated so many temples where puja was to be performed. He never rejected puja. The aim of puja is to help us gain control over our mind. Just like mantra japa, puja is also a way to put forth effort. If one says doing puja is against Advaita because it involves identification with doer-ship, then mantra japa is also against Advaita. With such logic, a so-called Advaitin cannot do japa or pray. Don’t all of those spiritual practices involve duality? Without duality, there can be neither guru nor disciple. There isn’t even any scope to contemplate “I am the Atma” because, in such contemplation, there still a limited individual thinking—isn’t it? Even in mananam [Vedantic reflection], there is duality.”

Amma then began speaking about the Brahmasthanam Temples built by the Mata Amritanandamayi Math and consecrated by Amma. “The Brahmasthanam temples were constructed because devotees wanted to do something that would help reverse the decline of people maintaining puja rooms in their homes,” she said. “The idea is that they are places where devotees can gather, participate directly in the worship, hear some satsang, share food as prasad and provide opportunities for people to help the downtrodden—help poor village children get educations, provide care for neglected elderly… This is why Amma set up those temples. But don’t forget the foundation, which is that the puja is a means to gain mental purity.”

Amma then continued saying, “We need to see life itself as a form of puja. Live with that puja bhava—the attitude of seeing all your actions as worship and accepting all the experiences that come to you in life as prasad. Knowing that everyone and everything is a manifestation of the Atman, regardless of whether someone scolds you or praises you—that is verily Advaita. We need to cultivate the ability to accept everything as grace. Or cultivate the ability to see the negativities of others as reflections of our own flaws. Such attitudes are puja bhava. Ultimately, puja bhava is seeing the Self, or God, in everything. Even though initially this is difficult, gradually the feeling of oneness arises.

“A staircase is needed only until we reach the higher level. For Amma, there is nothing to reject; everything is accepted in love. Considering the feelings of others, spiritual aspirants should learn to love all, respect all, and feel everyone’s difficulties as their own. Some people do not have the good fortune to have sweetness in their lives. Understanding this, you should share the sweetness you’ve been fortunate to receive with others.

“Like the crow in the parable that could only drink the water in the fluted vase if it dropped rocks in it first, we should invoke god within with the required effort. Gaining control over our mind is the goal. All of the various forms of spiritual practices are means to achieve that common end. So, Amma cannot reject any of them. They were established by the rishis, and the rishis were not fools. Seeing God in all forms, they accepted all forms as appropriate means for helping the mind gain focus. If one looks into the depth of all the various spiritual practices—even just singing bhajans to oneself—you will see that they are not different from the Atma; they are, in fact, keys that open us up to that truth.”