Four or five years ago, with Amma’s upcoming two-month tour of Japan and North America looming, Amma decided she wanted to do something special for the 3,000 or so ashram residents remaining in Amritapuri. In fact, Amma had already seen all 3,000 of the ashram residents privately, one-on-one–sannyasis, brahmacharis and brahmacharinis, householders–but still Amma wanted to do more. What did Amma decide she wanted to do? Like most mothers, she wanted to cook for her children. More than 3,000 masala dosa’s later, a new form of festival had taken birth in Amritapuri – the Festival of the Masala Dosa. 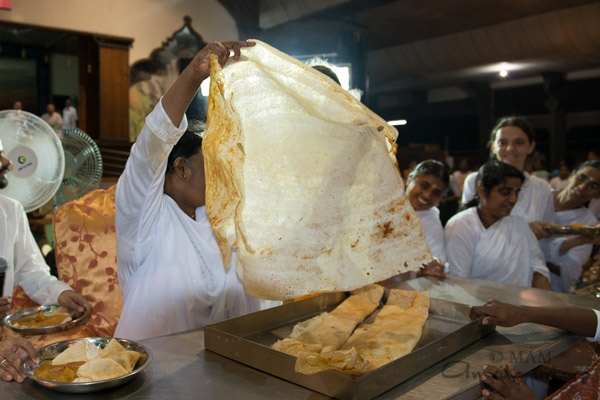 Masala Dosa is now an annual tradition in Amritapuri, and this year was no different. After bhajan’s on May 15th, Amma remained in the bhajan hall and began cooking dosa after dosa. After a while, she shifted to serving, while ashram brahmacharis and brahmacharinis continued to cook via 10 different stoves. After serving a dosas to each person in the entire ashram, Amma told everyone that they should eat as many dosas as they wanted.

I guess, what the pandit’s say is true: Atma-jnanam and food are the only two forms of giving through which the receiver eventually says alam–“enough.” Till next year.