After the Iowa programs Amma and the tour group crossed the border into Canada for four days of programs in Toronto, Ontario, Canada.  This was Amma’s 10th visit to Toronto.  Each of previous visits marked the end of the summer tour, but now for the first time the Toronto programs fell in the middle of the tour.

Before crossing over into Canada, Amma stopped with the tour group on the banks of the majestic Lake Huron, one of America’s ‘Great Lakes.’  When the caravan arrived there it was pouring rain, but that didn’t dampen anyone’s spirits.  Almost 300 people managed to squeeze around Amma under a small picnic shelter on the shoreline.  Amma gave satsang, shared jokes and a prasad dinner with everyone.  After the meal the clouds parted and the sky began to open up as the sun was setting.  Amma then led everyone down the water’s edge and looking out upon the vast body of water, she sang Shokham Idu Enthinu Sandhye and Shritiyum Niye.
After the beautiful stop with Amma, the caravan continued across the border and on to Toronto.

Over the next four days, Amma held one day of public programs and a three day retreat. During the first evening program in Toronto Amma was welcomed by several dignitaries, including internationally renowned author Dr. Wayne Dyer and former Indian Navy Chief and now current Indian High Commissioner to Canada, Admiral  Nirmal Verma. 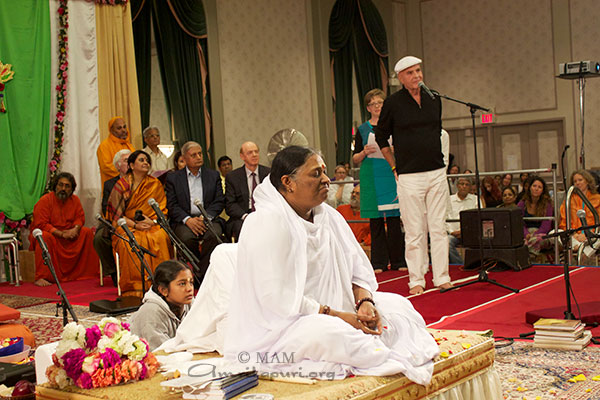 Dr Dyer addressed the crowd paid his respects to Amma,

“There is another love that we are blessed and honored to be in the presence of, here with Amma. It is a love called divine love. This is a love that never changes. This is a love that never varies. This is all she has to give away, and gives it tirelessly to all of us. [She is] a reminder of what our Native People once said: ‘No tree has branches so foolish as to fight among themselves.’ We are all branches on a tree called ‘humanity’ and in every moment of our lives we are reminded by this saintly woman that in every moment you have this choice: You can either be a host to God or a hostage to your ego.”

Later Dr Dyer shared his feelings upon meeting Amma:
“I am immersed in a sea of divine love with a living saint, Amma. There are no words to describe the inner glow I felt as I was held, hugged and loved by this celestial being who walks among us. I sat next to her for over an hour observing her embracing hundreds of people, and I will forever feel the inner glow.”

After the final program ended in Toronto, Amma and the tour group headed back to the US to MA Center Chicago for the next stop on the 2013 America Yatra.

Amma is making our world a better place 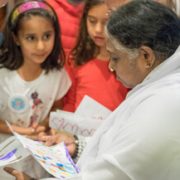 The Blessings of a Spring 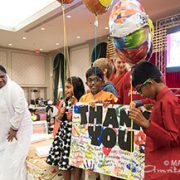 Unbroken stream of Love in Canada