On Amma’s fourth visit to Kanyakumari (India’s southern cape), her public program was held on the grounds on the recently completed Amrita Vidyalayam. This expansive, beautiful school joins the constellation of Amma’s 56 primary and secondary schools throughout India dedicated to inculcating timeless spiritual values in India’s youth while imparting a top-class academic education – education for living, and education for life. 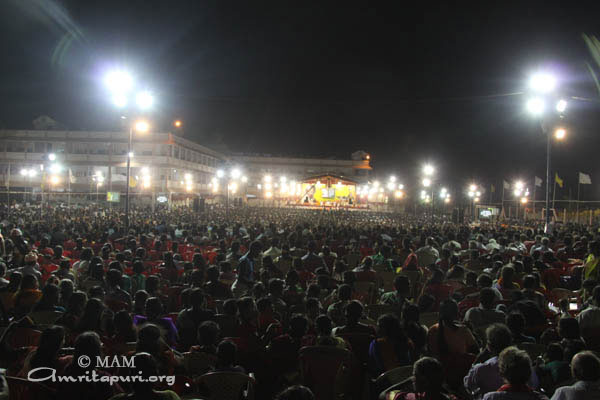 In his remarks, Swami Chaitanyananda said, “Out of compassion, Amma travels around the world, blessing all of us.

(“Parvati is the Mother, Shiva is the father, the relatives are Shiva’s devotees, the native place is all the three worlds”). I am remembering this sloka by Shankaracharya. When I studied that I realised that it will be possible only if you live in the highest plane of consciousness. Now as Parvati Devi, Amma has come bless all of us. 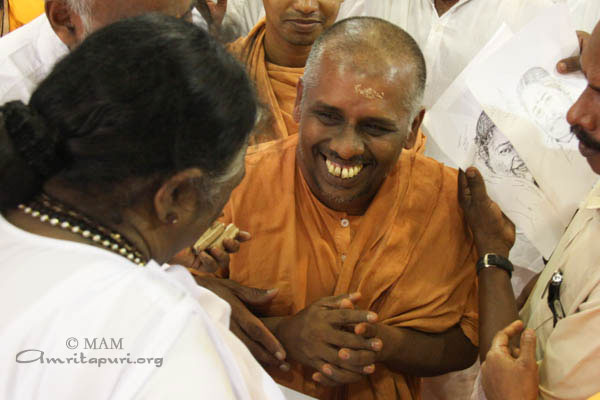 MLA Pon Radhakrishnan shared, “30 years ago, my father met Amma in a function. People were coming to her and get blessings. At that time I thought egoistically, ‘Why we should get the blessings of a human being?’ Two years later I was introduced to Amma. When I met her I was crying and crying. Amma asked me why. ‘Amma, please protect the children of Kanyakumari’ is the alms that I begged.”

Amma answered his prayer, proceeding to embrace the children of Kanyakumari one by one. Despite the massive size of the crowd, the assembled devotees were remarkably peaceful – as if they knew that Kanyakumari herself was among them — having reached her, they were in no rush to go anywhere. They listened closely to her satsang and bhajans, and waited patiently to receive her darshan all through the night.

Her darshan went on until 9:30 am the following morning.