En route to Puducherry, Amma had stopped by the road to gather with the tour group. As the 14th of April was Vishu, the New Year according to the calendar of Kerala, Amma wanted members of the group to share their perspective on the meaning and importance of Vishu and its associated traditions. Specially mentioned was the tradition of the parents ensuring that the children’s first sight when they open their eyes that morning is an image of Lord Krishna along with different fruits and vegetables. Next to the image of the lord will be placed a mirror, symbolizing the fundamental principle of Sanatana Dharma that the Creator and creation are one and the same – that God dwells within each of us. 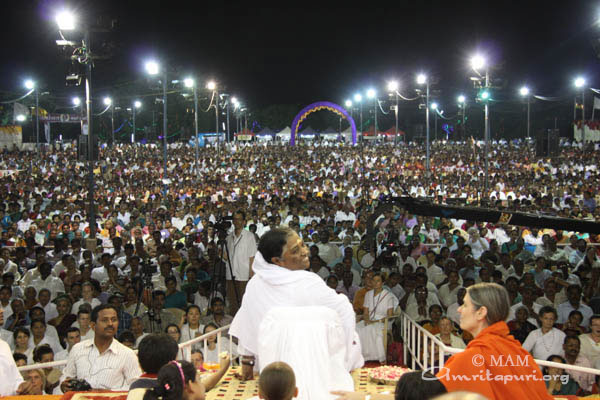 This was Amma’s third visit to Puducherry. She was returning after four years, and the throngs of devotees gathered hours before her arrival, eager to welcome her back. Less than 500 square kilometers in size, Puducherry is also home to a large number of French expatriates. As such there were many French people and other foreigners among the devotees who came for Amma’s darshan.

Near the sea, the relatively cooler climate was also a breath of fresh air for the tour group after the blistering heat of Madurai.

As part of the programme, Amma expanded the Amrita Nidhi pension project to benefit widows, the differently abled and others living in poverty in Puducherry. For them and all the devotees gathered for Amma’s programme, it was an auspicious start to the New Year indeed.

The darshan finally ended after 8:00 am the next day, and Amma and the tour group moved on to Chennai.