Organizers of Amma’s programs are typically preoccupied by the same question. The question is always “Where?” Where we can we fit all these people? Because Amma’s programs never get smaller. And no matter the size of your venue, Amma’s program will ultimately outgrow it. 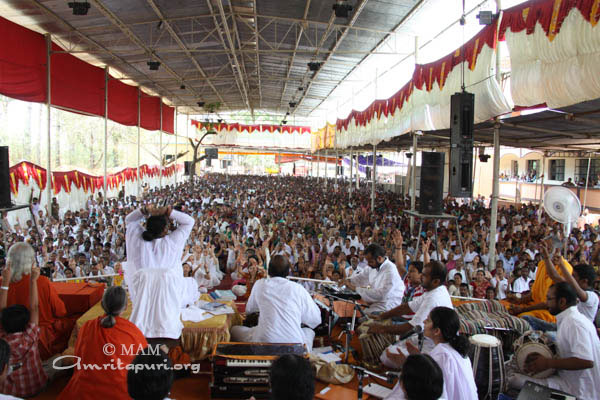 Recognizing that Amma’s following has long since outgrown the capacity of the Madurai Ashram’s prayer hall, the local devotees came up with a unique, outside-the-box solution to this ever-present challenge – they realized that the hall was far too small. But just behind the ashram, just near the Brahmasthanam Temple, was nice, wide access road. So, they approached the local government authorities, and requested permission to borrow the road for two days. Permission was granted, and a large pandal was constructed over the road itself – proving once again that wherever Amma holds a program becomes a temple; it becomes hallowed ground.

Amma, too, found a way to be sure that the original temple hall was still blessed by her presence – on the evening of her arrival, she served Prasad, sang bhajans and shared a satsang from inside the original hall. When it overflowed with people, she invited them up onto the balcony overlooking the hall, so that everyone could share time inside the prayer hall with Amma in a more informal setting. Each time Amma arrives at a city on this tour, she has been hosting these informal gatherings with her children. They have the flavour of a family get-together, and ultimately, that’s what they are; a mother gathering her flock. 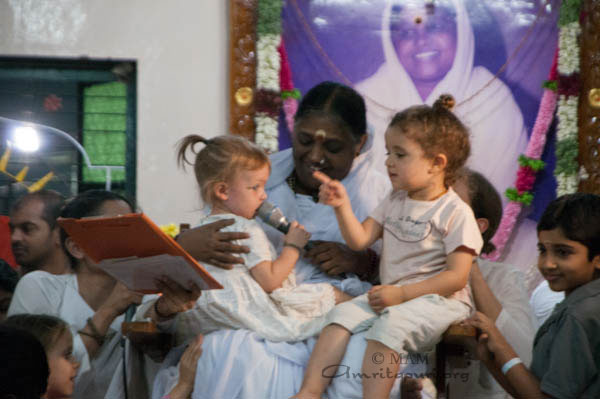 That evening, after serving prasad to her children, Amma started singing a bhajan. Just then two cute toddlers came to Amma and started dancing in front of her. Then, mid-dance, one of the children began to try to climb up into Amma’s lap. Amma was sitting on a chair, so it was not easy for him to climb up. Slowly but surely, though, he made his way on to her lap. Seeing him perched in Amma’s lap, the other toddler started climbing up as well. Amma started laughing along with all the others, and continued to sing uninterrupted.. once the second toddlers had also made her way onto Amma’s lap, Amma started sharing her mic with the little ones – it was a touching, multi-layered sight, carrying reflections of innocence, Amma’s ability to keep multi-task naturally and joyfully, and simultaneous awaken devotion in the hearts of all.

The two days of programs in Madurai ended after midnight on the second day with Amma singing ‘Elappula elo’, to the delight of all her gathered children. Joy and peace permeated the air in the temple on the road.