For the final stop on the 2013 Indian tour, Amma made her 25th visit to her ashram in Kodungallur.  This is the site of Amma’s first Brahmasthanam temple and before beginning her darshan, Amma made a special announcement on the mic briefly explaining the history behind it all.  She explained how the previous family who owned the land approached Amma and offered it to her and requested her to build a temple on the site. They told Amma how for countless years the land was the starting place for the annual procession leading to the local Devi Temple. And after their insistence Amma accepted the land and in 1987 the first Brahmasthanam Pratistha was performed.  Amma then said that it was the love of her children that has drawn her back there so many times since then. 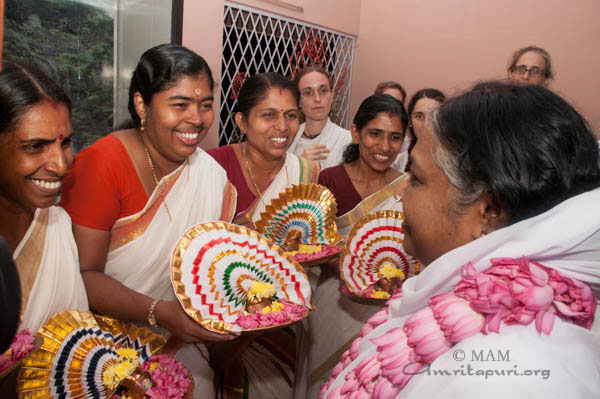 Throughout the day, students and teachers of Amrita Vidyalayam presented different dances to Amma to celebrate the occasion.

Before darshan started, Amma distributed pensions as part of the Amrita Nidhi program and seeds to cultivate organic farming.  Additionally participants of Amrita Sree groups were given working capital.

At the end of darshan Amma sang Tanana Tanana and Mayaji while everyone danced, completely rocking the hall, while it was pouring rain.  It was 6.45 in the morning by the time Amma finally left the stage, and travelled back to Amritapuri to conclude the tour.