After the programs in Kannur, Amma held the final programs of the tour outside of Kerala, heading north once more and crossing the border into Karnataka.  She arrived to Mangalore in the evening and was received by a throng of devotees singing  ‘Bandalo Bandalo Hridayeswari’ (Come, Come, Goddess of our hearts).  Amma called all the local devotees and the tour group up to the roof of the Amrita Vidyalayam school building and served prasad, shared satsang and sang bhajans under the starry night sky. 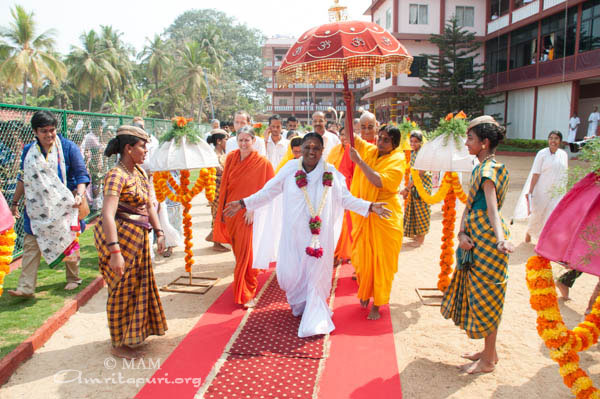 During the next two days large crowds came for Amma’s darshan, to hear Amma sing many bhajans in the local Kannada and Tulu languages and lead all in the Manasa Puja in Kannada.

Each day as Amma made her way to the stage she was greeted by children dressed in folk costumes performing traditional dances. The program venue, starting at the path from Amma’s room to the stage was decorated very beautifully with a very  artistic touch.

To begin the first day’s program, Amma helped launch a campaign against the use of plastic bags and distributed cloth gunny bags to several local dignitaries on the dais. Mangalore has been very active in the ABC program, regularly holding clean up drives around their city. Additionally a few hundred Vidyamritam scholarships and Amrita Nidhi pensions were distributed to local people in need. 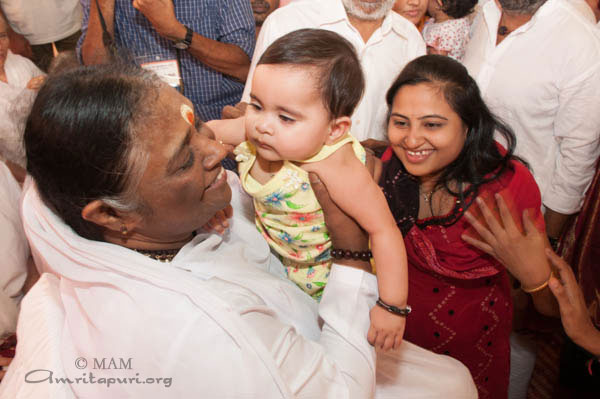 During the darshan, the local Amrita Vidyalayam students presented several cultural dances including ‘Kamsale,’ a dance in honor of Lord Siva from northern Karnataka involving acrobatics, and playing bells.

Although the external atmosphere was dusty, hot and humid, the hearts of the devotees were light, warm and cool. Amma ended the final program by singing Tanana Tanana and at the request of all the devotees shouting in unison, Bandalo Bandalo.  Singing with them the same song they welcomed Amma with two days prior and leaving them with a sweet memory in their heart.