After 6 weeks of traveling all over India, Amma finally returned to Kerala with her program in the hills of Mananthavady. After that the tour group zig zagged down the hills and held a two day Brahmasthanam festival in Kannur. Upon her arrival Amma served prasad dinner to all the local devotees who were waiting to greet her. 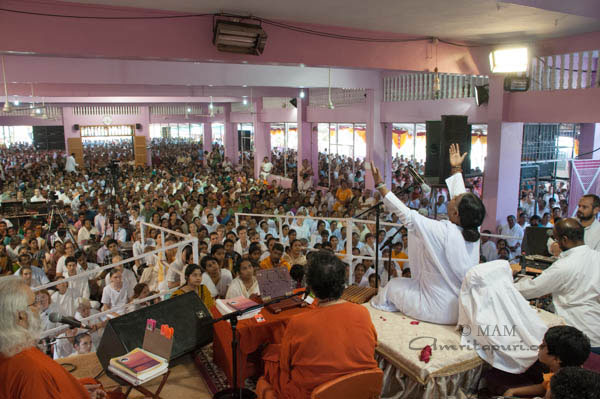 During the programs Amma extended the ashram’s pension and scholarship programs to local women and students in need. Additionally Amma offered financial assistance to victims of the Chala gas tragedy.

Throughout the programs student volunteers of local Amrita Vidyalayam schools could be seen all over the ashram doing service, including serving water to the devotees waiting for their darshan in the extremely hot and humid weather. The students also found time to perform various cultural programs during Amma’s darshan. Amma held satsang and bhajans on both days in the morning before she started darshan.

At the end of darshan on the final night Amma sang ‘Bandalo’ and ‘Mayyaji’. The next day Amma and the group headed north again and left Kerala, for the next program in Mangalore, Karnataka.
– Kannadi