Amma’s message during the Sannyasa Initiation

In October 1989, on Vijaya dashami day, in a solemn atmosphere of devotion and joy, amidst the chanting of Vedic mantras and puja, one of Mother’s sons, who was known as Balu when he first came to Mother in 1979 and later became Brahmachari Amritatma Chaitanya, was ceremoniously initiated in Sannyasa. Mother gave him the name of Swami Amritaswarupananda Puri. 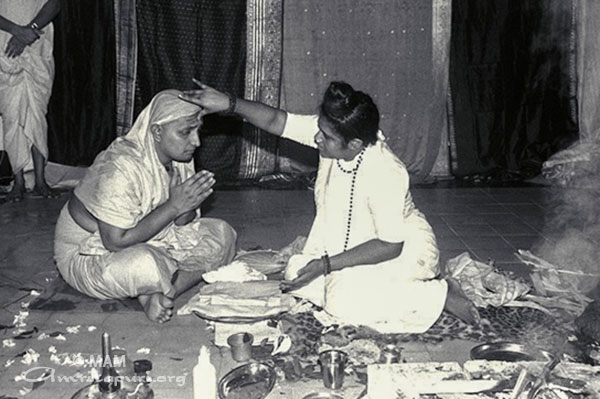 Another Sannyasi, a devotee of Mother’s by the name of Swami Dhruvananda, performed the traditional fire ceremony and other rituals. The rites of initiation began the previous night. Mother was present throughout the ceremony, showering her blessings and giving advice and instruction. The ceremony was complete by the break of dawn the next day.

Speaking to the assembled devotees, Mother said, “Today Mother is happy because she could dedicate a son for the good of the world. Now that he has been given Sannyasa, he has become the son of the world. Hereafter, he is not my son. Today the Lord has given me the good fortune to dedicate one son to the world. At this moment Mother remembers his father and mother and salutes them also. Children, all of you pray for this son.

“Pray for him to gain strength. From now onwards he is not Amritatma Chaitanya, but Amritaswarupananda Puri. Mother (who is not herself a Sannyasini) has not gone against the traditional scriptural injunctions by giving him Sannyasa. It is in the “Puri” order that Sannyasa was given to him (by another Sannyasi). Many have asked Mother if it would not have been enough if she had given Sannyasa to him?”

“But Mother would never cause a disturbance to the tradition of the ancient sages. Mother will not act against the tradition. Mother had a desire that a humble devotee should give the ochre cloth to Amritatma. Otherwise the ego ‘I am Brahman, I am Perfect,’will develop in him. Such thoughts will not be there if it is a devotee who gives the cloth, is it not so?

“Mother wanted to give Sannyasa through a Swami from the Ramakrishna Order. Mother had said long before that a Swami from that order who is a devotee will come here when it is time. It was at that time that Swami Dhruvananda came. His Guru was one among Sri Ramakrishna’s direct disciples. He came and did the fire ceremony.

“Yesterday this son performed all the funeral rites both for himself and his relatives. He took leave of his father and mother. He did all the rites that are performed when one dies. All forms of bondage were given up. Hereafter, he is your son, the son of the world. All the duties that one has towards trees, creepers, plants, animals, birds, and all other creatures were eliminated. He performed the fire ceremony praying, ‘Make me introverted, lead me to effulgence, spiritual splendour, brilliance, lead me to the Light,’ and accepted ochre cloth as a symbol of sacrificing even his own body to the fire. The name Amritaswarupananda was also given. Thus, today is a good day, children. All of you pray, ‘Grant this son strength to give peace and tranquillity to everyone in this world. Make him a benefactor of the world.’ 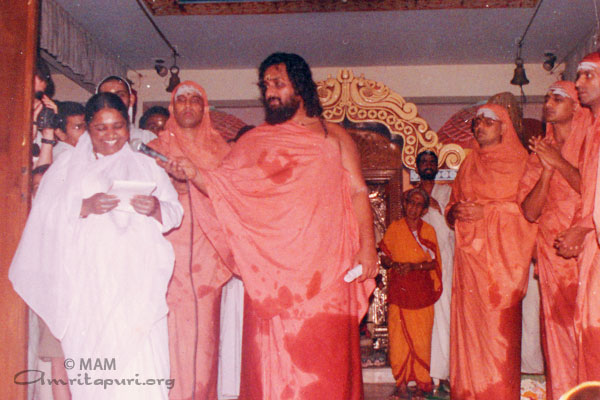 “Even a Sannyasi’s breath should be for the good of others. It is said that he should not even breathe for his own comfort. The whole body has been sacrificed in the Fire of Knowledge. Ochre is the colour of fire. Now he is of the nature of the Self. We are all that eternal Self. He should worship everyone seeing them as Devi or the form of God. It is through human beings that God should be served. Now he doesn’t have a particular God. This son should serve the people seeing them as God. His remaining life is to serve them. That is the action that he should do hereafter; to live dedicating his life to them who are verily the forms of God. This son doesn’t have a realisation or penance higher than that. All that is over. He should serve everyone seeing them as God. His duty towards God is compassion towards the poor and needy.

“Other than that, however much penance you do, there is no benefit. Perfection can be gained only through those actions performed while thinking of God. Permission to leave the country cannot be gained without a passport. This passport of Realisation should be gained through service. Nothing can be gained without a passport. Now Mother has given more importance to service. With each breath you children have the thought, ‘Amma, Amma’. Because of that, Mother has the conviction that you can serve everyone seeing them as God.

“Children, all of you now pray two minutes for this son. Now he is not a son, but Swami Amritaswarupananda. ‘O God, let him not become a malefactor for anyone in this world. Let him not bring any insult to the great Sannyasa tradition. May he have the mental equipoise to see everyone as God and serve them selflessly.”
he was able to complete the funeral rites without help.