Los Angeles is a megalopolis–it spreads for miles and miles in all directions; in one of those directions it engulfs Hollywood, Mecca to budding stars and starlets.  So is it any surprise that at Amma’s LA program, the second night retreat program included theatrical shows? 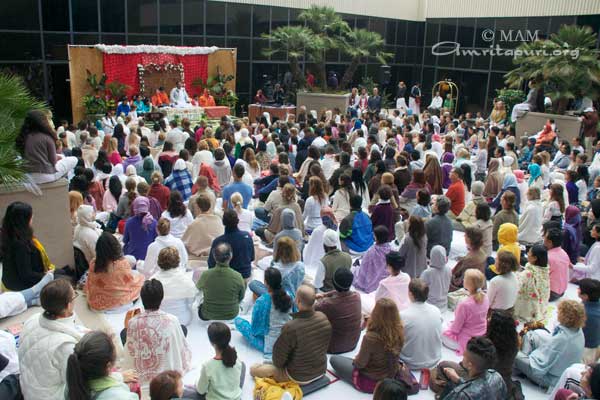 As Amma was giving darshan to the huge number of people coming for her blessings, first a humorous stage play was enacted, complete with semi-bollywood dance numbers. The play could have been passed off as a comedy of manners, with mistaken identities and impersonations–but it was more than that. It was a play about love. About what we mistake for love, and how we recognize love when it is real, and how our expectations and prejudices can stand in the way of real love.  When all the mix-ups were sorted out, led by quotes from Amma, everyone in the play had found someone she or he really could love.

LA is a city of diversity–people from all over the world come to this “melting pot”, so it was fitting that as the evening’s program continued, other cultures were represented.  Mexico, not a hundred miles away from LA, was represented by a man singing traditional Mariachi songs, accompanied by women dressed in long Mexican skirts and hand-embroidered blouses.
An African-American man, sometimes drumming, singing, and occasionally dancing himself, led a group of women in traditional African dance. This exploded, by the end, in an invitation to all in the room to join in–and little children, teens, adults, staff members, elderly people–everyone who felt like it–joined in!

The last presentation for the night was in stark contrast to the preceding loud and rousing events: softly the strains of a harp, accompanied by a softly played tabla, settled the room down. Classical Indian music provided a gentle and peaceful setting for Amma’s ongoing hugging.
The second day of every retreat featured a special outdoor meditation with Amma, followed by a question/ answer session. At the end, Amma led everyone present in singing and playing pattycake together, before she herself served dinner to all. There were special treats at the end: papadoms for the children, and ice cream mixed with crumbled papadoms for all.

Most of the road journey from Los Angeles to New Mexico was through the deserts of the South-West.  Amma decided to break up the journey and stop for a picnic with the group in the middle of the desert.  For most of the day temperatures had soared to over 100 degrees; fortunately by the time Amma sat with the group, as the sun was setting it cooled off and everyone was able to enjoy a memorable dinner time with Amma.