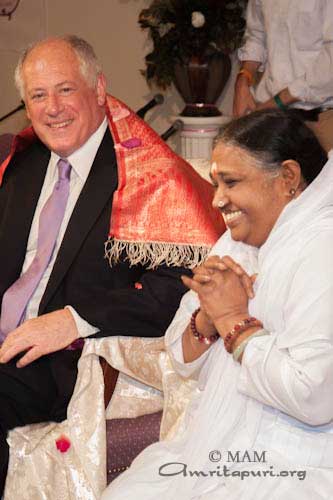 The Governor of the State of Illinois, Patrick Quinn, inaugurated M.A. Center Chicago, a new branch of the Mata Amritanandamayi Center today. The center is located on a 141-acre property in Elburn, Illinois, a suburb of Chicago.

Governor Quinn said, “I think it is so important that our state of Illinois is a home to an M.A. Center. And it is a high honor for me, as Governor to declare, this day, the opening of the M.A. Center of Chicago.”

Governor Quinn praised Amma’s worldwide humanitarian service, saying, “I wanted to be here tonight to honor one of our world’s humanitarian leaders. It is especially important that we understand that feeding the hungry and taking care of those who are poor is a mission that all of us have. A great leader of our country, Martin Luther King, Jr., once said, ‘Everyone can be great because everyone can serve.’ And I think all of us have learned, from the example and life of Amma, a life of service—a very important way of life indeed.”

Governor Quinn praised the value of Amma’s darshan, saying, “There’s a reason she is called the Hugging Saint: she knows how to reach out and hug everyday people. And I think that is so, so important.”

Governor Quinn concluded his address by presenting Amma with a plaque applauding her works as a spiritual leader and humanitarian. He then extended an open invitation to Amma to stay whenever she wanted in the Governor’s Mansion in Springfield, Illinois, specifically offering Amma rest in an antique bed that belonged to former American president, and Illinois native, Abraham Lincoln.

“Amma we love you today. We will love you always. And thank you very much,” Governor Quinn said.

The inauguration took place during the first night of five days of programs conducted by Sri Mata Amritanandamayi Devi (Amma) in Elburn. Amma has been coming to the Chicago area every year since 1986.

Other dignitaries to grace the dais and address the gathering included the mayor of Elburn, David Anderson, and Kane County Board Member, Drew Frasz