As an expression of Her infinite compassion, Amma has been providing homes to the homeless and the destitute in Kerala since 1987. Moved by the plight of the homeless all over the country, Amma, later, launched the unique, and massive Amritakuteeram Project in 1996 for building 25000 houses for the homeless. Putting the project in place and identifying the beneficiaries, took almost 18 months. Honorable Prime Minister, Atal Behari Vajpayee, handed over the keys for the first 5000 houses in 1998. Since then, with Amma’s Grace, 25000 houses have been built all over India. This was possible only with the support of various State Governments, active and selfless participation of the disciples, devotees, students of Amrita Institutions, and well wishers. The contribution from the International community, particularly the students from Japan has been significant. 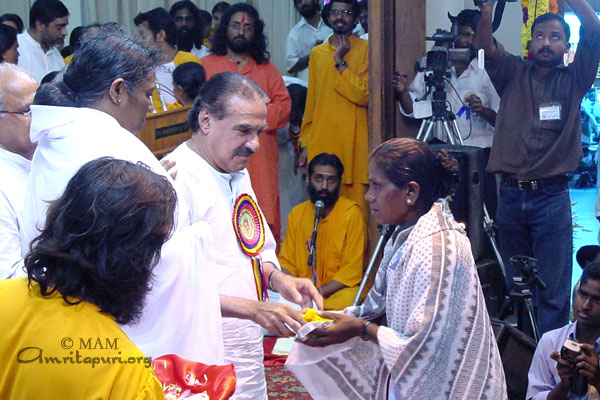 K M Mani, the Honorable Minister received the symbolic key of the Amritakuteeram Project from our beloved Amma.

With Revenue Minister K.M. Mani handing over the keys to 5,000 free homes, the M.A. Math met its goal of providing 25,000 homes to the poor through its Amritakuteeram free-housing scheme.

Amma then immediately announced the Math’s plans to expand the project. Its new goal is to build and distribute keys to 100,000 homes within the next 10 years.