Amma’s 58th Birthday Celebrations began at 5:00 a.m. with Mahaganapati Homam performed by Surya Kaladi Jayasuryan Bhattatiripad on the program grounds at Amritapuri campus of Amrita Vishwa Vidyapeetham. This was followed by the chanting of the Sri Lalita Sahasranama for world peace. 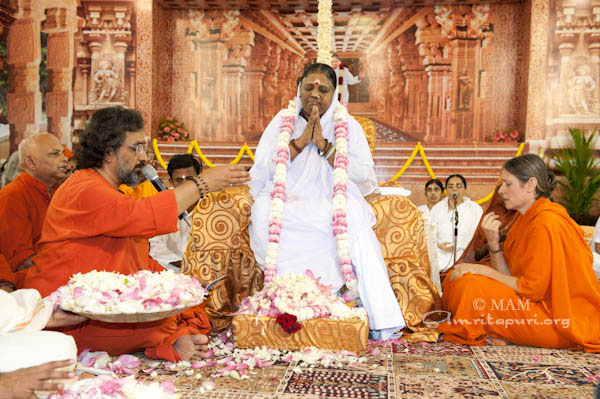 Swami Amritaswarupananda Puri delivered a satsang in the early morning about Amma’s life and teachings as thousands upon thousands of people poured into the special tent erected for the birthday functions.

Around 8:50 a.m., Amma started from Amritapuri Ashram to the program site, crossing the backwaters on a boat. Devotees lined the bridge connecting Alappad Panchayat and Vallikkavu as well as the roads leading to the Amrita University.

Amma was welcomed with purna kambham to the sounds of panchavadyam and a classical mohiniyattam group dance by students of Amrita School of Medicine, Kochi.
Sri Guru Padapuja was then offered by Swami Amritaswarupananda, with devotees chanting Sri Guru Stotram and the 108 Names of Amma. Garlands were then offered by all of Amma’s sannyasi disciples as well as by householder devotees and relatives. 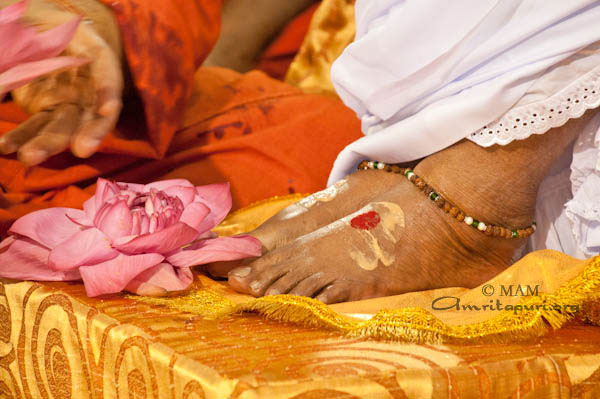 Amma then delivered her 58th Birthday Address. She began by saying, “The world in which we live in today has become so divided and filled with conflict. Seeing my children happily sitting together here, with unity and enthusiasm, as children of one mother, touches Amma’s heart.” Amma went on to explain that the state of the world today was deeply troubling, due to lack of unity and equality and a general deterioration in values. “In fact, even when Amma is amongst you children, her heart is crying,” Amma said. “When we consider the state of the world today, is there anything about which we can rejoice?” Amma said the solution to the world’s problems began with people introspecting, realizing their shortcomings and putting sincere effort to rectify them.

Amma then guided all the devotees in meditation and manasa puja as well as lead two bhajans, “Mata Rani” and “Ananta Srusti Vahini.”

A lot of charitable programs were launched in the formal part of the birthday function. Afterwards Amma began receiving the devotees for darshan wich continued till 8.amm next day morning. Lakhs of devotees who participated in the function were all given free food. 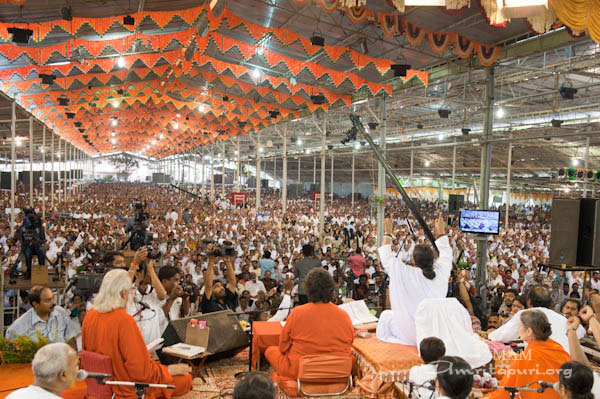 More than 45,000 visitors from all around the globe, which includes 3 from Pakistan and 13 from China, logged into the live webcast on Amritapuri.org. The approximate viewership on the web for Amma’s Padapuja function was over 200,000.