The 6th and 7th of March were this year’s special two days for Mumbai to receive and enjoy Amma’s loving presence.

Like each year, devotees flocked to the Nerul ashram, located on the Brahmagiri Hill, to meet Amma and receive her blessings. Amongst the dignitaries were Maharashtra’s Governor N. Shankaranarayanan, Justice S. Radhakrishnan, actress Vidya Balan, as well as top industrialists, businessmen and stars from the entertainment and movie sectors.

After his meeting with Amma, the Governor fully gave his support to the Amala Bharatam Campaign and added that “Amma does not belong to a particular place or particular society, she is the mother of all humanity.” 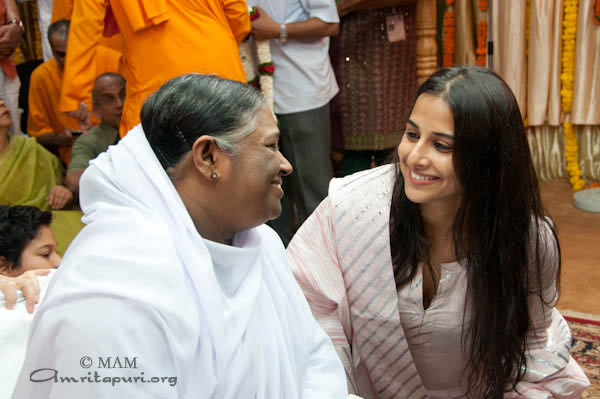 Amma’s visit to Mumbai coincided with International Women’s Day. Speaking the media on the occasion actress Vidya Balan had the following to say about Amma:
“I was eight when I first met her. To me, Amma is Love Incarnate, the Universal Mother. It’s the utter unconditionality of her hug — lepers, millionaires, film stars, the poor and the unwashed — all get the exact same warm, motherly embrace. Just imagine, 30 million have felt it across the world in the last 30 years. It’s unbelievable and for that split second, all barriers are gone. She doesn’t say pray to me, she says I’ll pray for you. Who does that today? She doesn’t want you to convert, but her quintessential message is, unselfish love alone can change the world, whatever your religious call. “

In her satsang, Amma spoke about the need to develop values along with the integration of the scientific development of today’s modern world. Amma said that a life based on values and dharma is spirituality itself.

On the occasion, Amma launched the Amala Bharatam Campaign (ABC) in Mumbai. Handkerchiefs were distributed to students and youngsters to help educate them about public health and hygiene. All the young people coming for darshan were also given handkerchiefs. The programs also included the distribution of Vidyamritam Scholarships, part of the Math’s Farmers Suicide Relief Program. 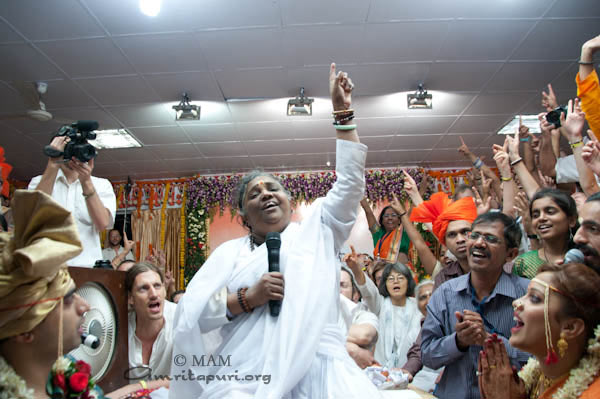 But the highlight of this year’s programs was Amma conducting herself the Manasa Puja in Hindi! Devotees and all the people present were deeply touched and inspired when hearing Amma address them in their native language. This brought her even closer to their hearts.

At the end of darshan Amma sang Hari Narayana and Mere Mujhe Me to the delight of all the devotees.