Swami Ramakrishnananda visited Manila, the capital of the Philippines from 13 -14 Sep 2008. He conducted satsangs and bhajans at the Hindu Temple. Br. Shantamrita Chaitanya conducted IAM technique meditation classes. He also visited one of Manila’s worst slums and distributed rice packets to the slum residents. Hundreds received the rice packets and a hot meal. He was accompanied by Senator Jamby Senator Jamby Madrigal and Mayor Alfredo Lim. It was mostly young mothers with their small children. Many of the women were also pregnant. Drug use (glue-sniffing) is rampant among even the pre-teen children.
Mayor of Manila, Alfredo Lim, who has made one of his primary goals to clean up the city of drugs and graft. He is eager to collaborate with Amma’s NGO to achieve these goals. He thanked Swamiji for coming all the way from India to help the poor of his country.

Look at the photos here. 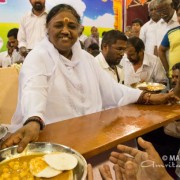