Amma’s program began on the 16th of October, which is also known as World Food Day. World Food Day was created to honor the founding of the Food and Agriculture Organization of the United Nations and is celebrated annually around the world. The devotees of Dublin together with famous Irish Artist Patrick O’ Reilly, created a display out of donated cans of food at the back of the darshan hall. Throughout the two days of the program many people came to see the display and help build it by adding more and more cans as it continued to grow. In an interview O’Reilly said: “All these tins will go to a food distribution point and will be distributed to people who are in need.” Amma was also presented with a garland by Jack Dunphy, the director of the Dublin Food bank. 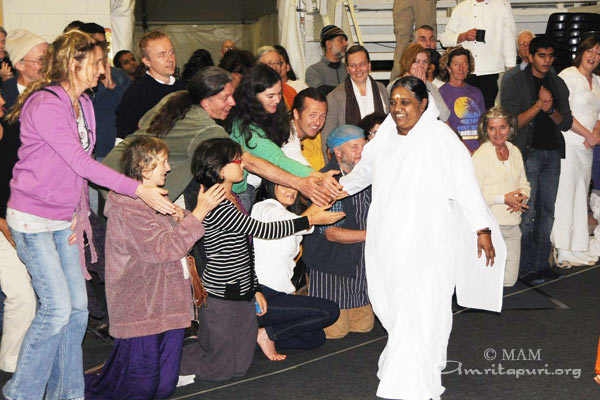 On behalf of the city of Dublin, Amma was officially welcomed by Mayor Ken Farrell. In his speech, Mayor Farrell said: “Amma Ireland, the Dublin Food bank and Irish Artist Patrick O’Reilly are collaborating on this day to provide an opportunity to unite against hunger. Our beloved Amma as a humanitarian will tell you this, fighting poverty is about values, values that care for our fellow human being.”