Like all babies, Ram is endearing himself to the hearts of his Amritapuri family, from whom he is receiving continuous vibrations of affection, if not actual hugs. “Is he eating, sleeping, taking his bath, is he happy??”, they ask. 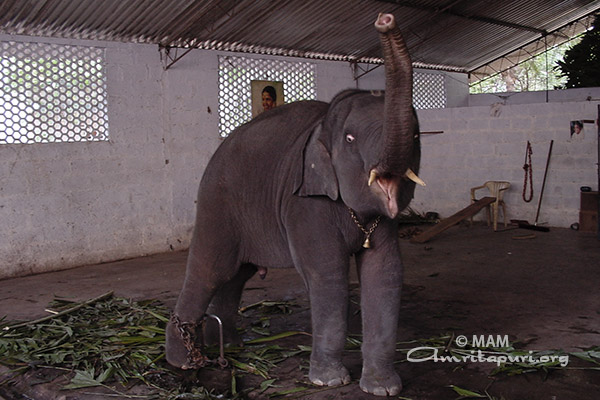 According to his keepers, he is progressing well, although they would like him to eat a little more. He is learning to open his mouth and take food on his tongue and to recognize different tastes. Jaggery balls, bananas, leaves, sugarcane, iddalis (rice cakes) are all taken with relish and his happiness is evident as he moves in a dance like way, flapping his ears and stretching out his trunk to tap the hands of visitors. At times he even tries balancing on two legs and once he seemed to be trying to do a headstand. At 8.30am, after his first bath, his head, ears, legs and back are anointed with three stripes of sacred ash and kumkum; he looks very beautiful indeed. Later in the morning, he leaves his pen beside the temple to visit Amma’s garden where he takes his second bath from a large bucket of water, spraying himself happily like a child. His new keeper Br. Benny sleeps close to him every night so that he does not feel lonely or cry. If left alone Ram cries in a way that sounds very much like a human crying. 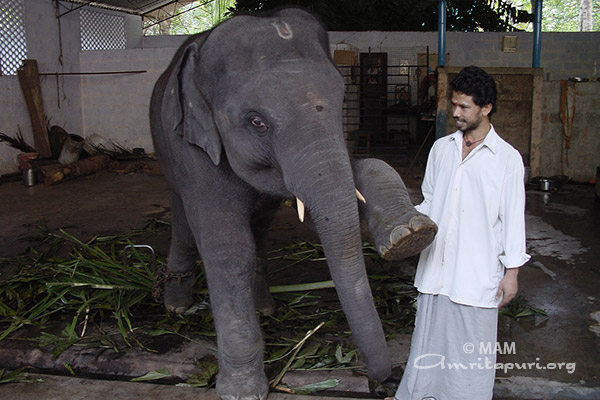 Now that his character training has begun in earnest, only Benny, and his trainer Kunjen will be allowed to touch him. His trainer, Kunjen is 65 years old and has trained five baby elephants before. He has forty years of experience as a mahout and was previously based at the famous Guruvayur Krishna Temple, which has fifty elephants. He says, “It’s very easy to love babies but they have to have correct care. Ram is not always going to be a baby”. Amma has instructed everyone not to touch Ram anymore so that he can develop a strong bond with his keeper and trainer and his character can be molded. Ram is perfectly formed; he carries 15 out of the 18 signs that indicate a good elephant, and the remaining three will become evident later when his tusks grow and he attains his full stature.