After evening bhajans on Tuesday, Amma was informed of the terrible tragedy in America (9/11 at the World tade center, New York), which had occurred less than two hours before (due to the time difference of nine and a half hours, it was then around 8:00 pm at Amritapuri). She spoke with Br. Dayamrita Chaitanya at the San Ramon ashram, and Swami Ramakrishananda Puri, who had just arrived in New York City on Monday to conduct satsang programs. He was not near the downtown area and is safe. He cancelled his New York satsang on Tuesday, and spent his day in prayer with local devotees.

Beginning the following day, in addition to the morning archana, which takes place every day at Amritapuri, special archanas have been conducted, specifically for the souls of the departed and to ease the suffering of the injured and the bereaved. There are now four of these special archanas taking place each day, at 7:15 am, 10 am, 4:30 pm, and 9 pm. Also, a continuous chant of LOKAH SAMASTAH SUKINO BHAVANTU takes place every morning from 8:30 to 9 am. These special prayers will continue for seven days.

On Wednesday evening, a special puja was conducted in the kalari. At this touching ceremony, Americans present were given an opportunity to offer flowers at the altar for the souls of the departed.

Since Tuesday even the regular spiritual practices being conducted at the ashram seem to have taken on a deeper significance for many, some of whom previously may not have had such a personal relationship to the suffering and strife taking place in the world. Especially the following prayers, can be heard being chanted with renewed sincerity and devotion.

Lead us from untruth to Truth,
darkness to Light,
and death to Immortality.
OM Peace Peace Peace

May all beings in all worlds be happy and peaceful. 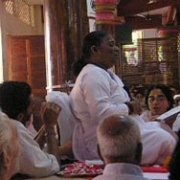 Lost in the bhava of the song