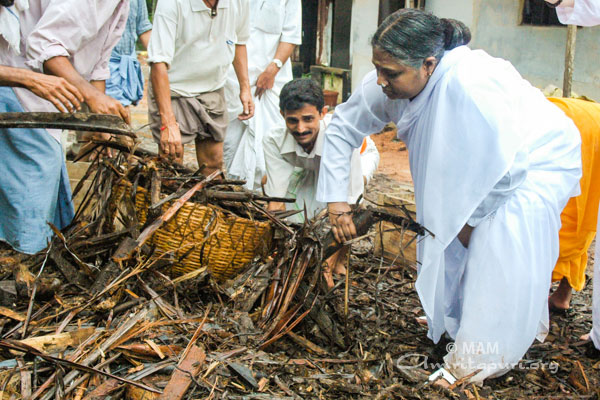 Delivering her 57th Birthday Address, Amma spoke about how despite the connectivity created via globalization, the world is still suffering. “Where have we gone wrong?” Amma asked those assembled. “By connecting the external aspects, the entire world is being reduced to a small village. However we’ve failed to pay enough attention to uniting the inner aspects, to connecting all of our hearts and minds.” Amma also spoke on the importance of cultivating respect for Mother Nature, the perils of alcohol and drug abuse, the need for abidance in dharma, the role of meditation and many other topics.

At the conclusion of her address, Amma spoke about India’s problem with pollution and litter. She said, “India is an atomic power. India is scientifically and economically advancing. Many reports say India is poised to be the third largest power in the world by 2025. But in terms of cleanliness, we still are in diapers.” Amma then announced that MAM is ready to take responsibility for construction of toilets in government schools and public areas. Amma said that with the support of the state governments {news}, MAM would start this project in Kerala and then move on to other states throughout the country. 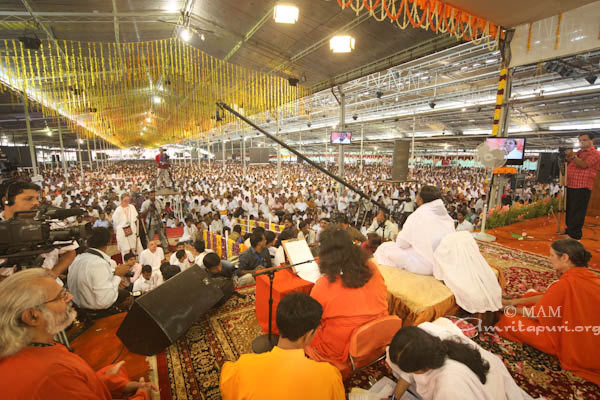 Amma said she wanted devotees to form committees to take responsibility for cleaning their locality, approximately one committee for every two kilometres. “A chain of such committees could really bring about a massive transformation,” she said. “These committees should ensure their localities have trashcans in various places as well as signs telling people not to throw trash on the roadside or to spit. The waste should be collected regularly and properly disposed of.” Amma also said she would like to provide one million reusable handkerchiefs to school children, requesting them to use these for spitting. She said that in this way many diseases could be prevented from spreading.” All with thunderous applause welcomed Amma’s speech.