Amma’s birthday celebration began at five in the morning with Mahaganapati Homam performed by Surya Kaladi Jayasuryan Bhattatiripad. This was followed by the chanting of the Lalita Sahasranama for world peace. Tens of thousands of devotees participated in the archana. The birthday celebration was officially inaugurated at 7:30 a.m. with the lighting of a lamp by Swami Turiyamritananda Puri. Swami Amritaswarupananda then delivered a discourse on Amma’s life and teachings. 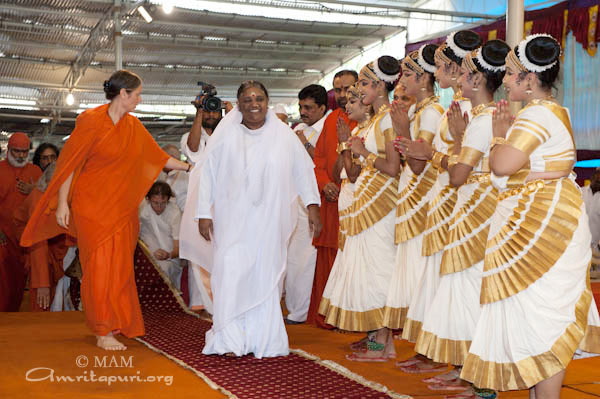 At 9:00 a.m., Amma was welcomed onto the stage by mohini-attam dancers, students of Amrita School of Medicine. A massive crowd was in attendance, filling the hall constructed on the Amrita Vishwa Vidyapeetham grounds and spilling out throughout the campus.

Led by Swami Amritaswarupananda, Amma’s pada puja was performed to the chanting of Guru Gita and then Amma’s 108 names. Amma’s senior disciples then garlanded Amma.

Amma then delivered her birthday address, which was translated by Swamiji into English.

Upon the conclusion of the address, Swami Amritaswarupananda then warmly welcomed the distinguished guests. Welcoming the guest on the dais Swamiji said, “The eyes of the world are on Amma today, and what does Amma do? She redirects our gaze to the poor and needy, to the suffering and downtrodden, to the sick and hopeless. She redirects our gaze to the widows, the handicapped, and the impoverished. In fact this is part of Amma’s birthday message. It is a teaching: Birth—true birth—takes place only when we place others before ourselves. This is Amma’s message: Take the whole world into your heart and become free.” 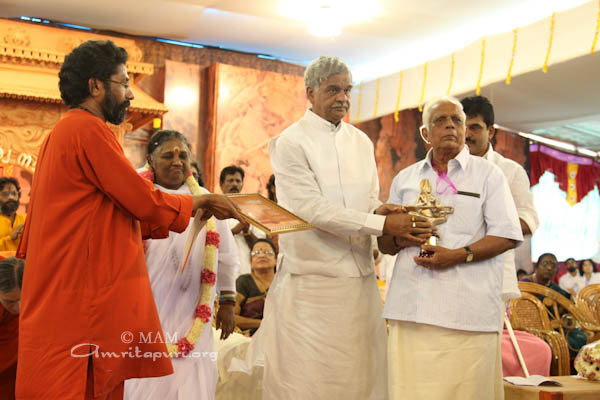 Dr. N.P. Unni, former Vice-Chancellor of the Sri Sankaracharya University of Sanskrit, Kalady, Kerala, was bestowed with the 2010 Amrita Keerti Puraskar. Sriprakash Jaiswal, Union Minister of State for Coal, Statistics & Programme Implementation presented Dr. Unni with the award. In his acceptance speech Dr. Unni said, “I am vowing that my life will be dedicated to spiritual progress and for that I seek Amma’s guidance.”

Several new projects and initiatives were then launched by the ashram.

AmritaSREE Suraksha is a group venture between AmritaSREE of MAM and the Life Insurance Corporation of India (LIC). Union minister Gurudas Kamat handed out the cheque on behalf of MAM to LIC Div. Manager Doraisamy who then handed over the policy to Ranganathan, the coordinator of AmritaSREE. Through this program MAM will organize the provision of life and accident insurance policies to all AmritaSREE self-help-group members and their families—a total of 100,000 families. 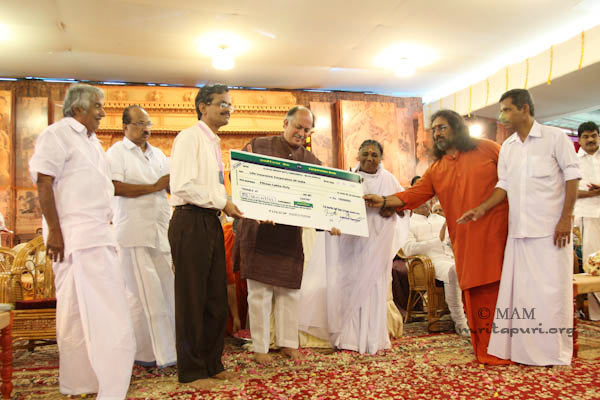 500 new students were enrolled into the Vidyamritam scholarship program and their initial awards were distributed by C. Divakaran, Kerala State Minister, and G. Babuprasad, MLA Haripad.

A Malayalam version of Amma’s biography written by American journalist Judith Cornell, Amma: Healing the Heart of the World, which is being published by Mathrubhumi Books was released by Mar Geevargese Koorlose Thirumeni of the Jacobite Syrian Orthodox Church.

A new publishing house, Amrita Books was launched, aiming to bring books about Amma’s life and teachings to bookstores throughout India. The first two titles released were Amma’s biography, and ‘From Amma’s Heart’, a collection of Amma’s conversations with devotees, both written by Swami Amritaswarupananda, The books will be available through Higgin Bothams bookstores.

A recent cyclone took the lives of four local fishermen from the Alappad Panchayat. MAM enrolled the families of these four fishermen with pensions of Rs. 1,000 a month. The pension stipends were presented to family members by SNDP Yogam President Vellapally Netashan.

It was a historic day for Amma’s website, with the official launch of the Ashram’s website in nine Indian languages: Malayalam, Tamil, Hindi, Marati, Kannada, Telugu, Punjabi, Bengali and Sanskrit. The new website — www.amrita.in — will ensure that Indians throughout the world can learn about Amma and her teachings in the their mother tongue. The sites were officially launched by Bishop Mar Crisostem Metropolitan of the Marthoma Church. 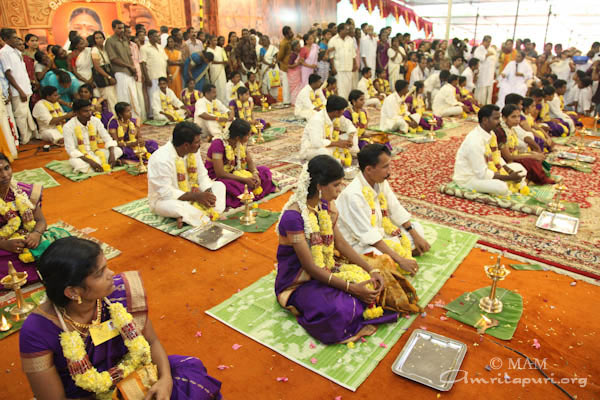 Students of Amrita University, Amrita Vidyalayam and members of AYUDH took an oath promising to help keep India clean and protect the environment. The local youth pledged to avoid intoxicants like drugs, alcohol and tobacco. Both pledges were lead by Swami Amritaswarupananda.

The distinguished guests then spoke a few words offering their tributes to Amma.

Amma conducted the marriage of 54 impoverished couples in a traditional Hindu wedding ceremony, with MAM assuming all expenses.

As the darshan began, prizes were awarded for the Matruvani Pracharaks who gathered the most subscriptions throughout the year. All the devotees in attendance where then offered Anna danam (free food). As of 3 a.m. in the morning, Amma is still continuing Darshan.