For a long time there was “sand seva.” Then, later it was “brick seva.” Now it is “bridge seva.” Towards the end of darshan on the 16th, Amma asked all the ashramites to come in the morning and help mix the concrete and pour the girders for the deck of the bridge connecting Alappad Panchayat with the mainland. 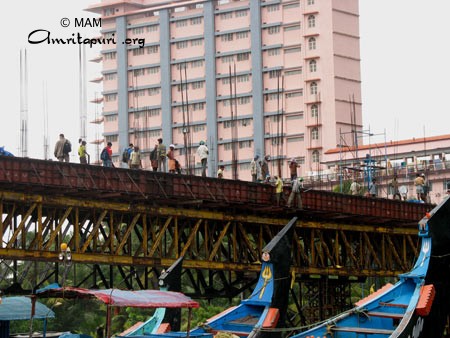 The next morning, not only did the ashramites come ready for work, but also a host of devotees and Amrita University students.

It was like the scene in the Ramayana, wherein Rama’s army builds the bridge from Rameshwaram to the island country of Lanka in order to rescue Sita from Ravana and restore dharma. The “Sitas” in this metaphor are the approximately 25,000 villagers who live on the peninsula. Alappad was the area in Kerala most severely affected by the 2004 tsunami, with more than 142 deaths along its 17.5 km stretch. The Ashram’s intention in constructing the bridge is to enable the evacuation of 15,000 people in 30 minutes should another such tragedy strike the area. Currently there is only one bridge connecting Alappad with the mainland, and it is at the southern end of the peninsula. {news}

As with all projects Amma initiates, here there are two sets of beneficiaries: those being helped and those doing the helping. It is in this way that Amma is restoring dharma through the construction of the bridge—inspiring hundreds to transcend selfishness and happily toil for the benefit of others. 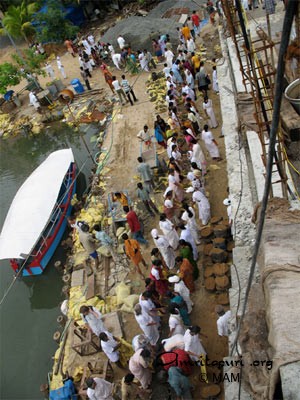 The mixing work took place on both shores of the backwaters—the men on the east and the women on the west. Old and young alike shoveled blue metal, sand and lime into sacks, which were then passed via human-chain to a mixer. Once mixed, the wet concrete was winched up to the bridge’s deck. There, men shoveled it into trays, which were then carried to the girder frames.

When asked about the work, one devotee from France who was carrying sacks of metal said she was simply doing seva: “I’m serving my beautiful Mother!”

A young man from Malaysia said, “Amma is just giving me an opportunity to help.”

Another French woman expressed her attitude of trying to see everything as a manifestation of the divine as she worked: “We’re just moving little pieces of Amma!”

As the seva continued—literally through rain and shine—a two-year-old boy from France was seen looking rather sad. When asked, his mother said that he was unhappy because he could not help. He was simply too little to pass the heavy sacks. But after some time the boy stood as part of the human-chain anyway, raising his tiny hands up to touch every passing sack. 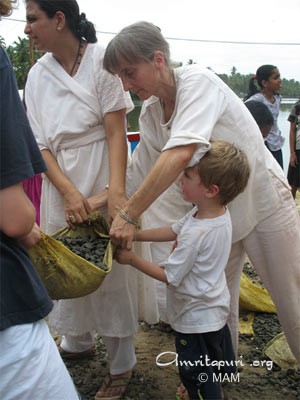 It was exactly like the story from the Ramayana, wherein the squirrel helps construct the bridge to Lanka by rolling in sand and then shaking that sand off amongst the boulders placed by Rama’s army. While the squirrel’s contribution in terms of quantity was not very impressive, its compassionate and selfless attitude touched Rama. At the end of the day, Rama reached down, picked the squirrel up and stoked it lovingly with three fingers. It is said this is why squirrels today have three stripes.

By mid-afternoon, the day’s bridge seva was finished. All the cement had been poured. This will be allowed to set for a few days and then the next layer will be poured on the 20th.