On April 2nd a small group of Amma’s devotees from the West and counselors visited the Ashram tsunami-refugee camp in Srayikkad. Dr. Sharada Sreedevi, a clinical psychologist and stress-management expert, led the group. Dr. Sharada’s group, which is organized by AIMS Hospital, has been meeting the tsunami-affected as part of a team of counselors organized by AIMS Hospital since the disaster struck. By now, everyone at the camp knows her well. 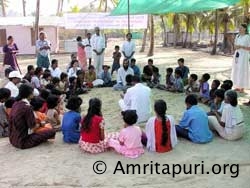 In one of the rooms where the therapists talked with the villagers, there was a picture of two children on the wall. When asked about it, one of the women said that they were her grandchildren, but that they had drowned in the tsunami. She then stared down at the ground. Another woman asked us to photograph her only remaining picture of her daughter, an 8×10 colour photo in a blue frame. She is lucky to have a photo—as many of the survivors not only lost their children in the tsunami, but also their photographs as well.

Another woman spoke about her 13 and 16-year-old children who had died in the tsunami, saying how they had been like her friends. She is known as a good cook, she said, but now she has no one to cook for.

The stories went on, a number of children and adults gathered in a temporary classroom and began talking to Dr. Sharada and her assistant Kala. They were very worried, due to the government-ordered evacuation [a false tsunami alarm] that had taken place four days earlier. With the evacuation, all their fears, sorrow and terrifying memories had resurfaced, and they were feeling very insecure.

Dr. Sharada began discussing their fears and drew the Japanese photographer Kevala into the discussion. She asked her about the meaning of the Japanese word “tsunami” and if she herself had been afraid when the tsunami rolled in. Kevala admitted that the tsunami was frightening. Sharada asked her how she was able to save herself from the wave, and Kevala said that she escaped by leaving when warned and running to a safe place.

Dr. Sharada quelled their fears by telling them that before they didn’t understand what a tsunami was, but that now they know how to save themselves. For example, many people died because when the sea receded, they went out to investigate. Now they know that if the sea is behaving strangely, they should leave at once.

Then they began to sing some of the songs that Dr. Sharada had composed for them, using their own words and images. Here is the translation of one song they sang:

Mom, my dear mom, can you tell me what a tsunami is?
It is the sweeping waves that reach us.
It is the waves hitting violently on the shore.
“Tsu” means harbour, and “nami” means waves.
The dangerous, untiring dancer, the waves,
The powerful waves that swallow us.
The powerful waves that destroy our houses.
The waves, high as the sky, that swallow all of our place.
The fearful waves, the waves that destroy our mental peace.
O my dear children, we moms cannot explain more than this.
So let us embrace each other and comfortably go to sleep.
The children stop asking and go to sleep.

As the adults and children sang, they visibly relaxed and began to smile and clap to the rhythm of the songs. The songs clearly had a powerful effect on them.

Dr. Sharada says that music can be a pathway to negotiate anger and aggression, to alleviate sadness and fear and to arouse, awaken and activate victims who are paralysed by depression and fear. Using simple tunes and the images expressed by the villagers themselves, the songs are both poetic and powerful. One song was composed for a grieving father from a dream he had after his 12-year-old daughter’s death: 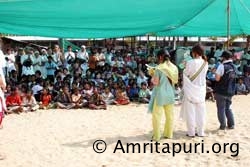 Songs were created expressing all the different situations and feelings of the refugees. At first the victims were incapable of singing. They couldn’t express their feelings. They were silenced by the profound and overwhelming nature of their tsunami experience. The therapists began singing to them, one line at a time, and slowly they joined in. Now they are eager to sing and compose new songs.

This singing therapy is a very simple technique, but very powerful and healing. Since time immemorial humans have used music to express their deepest feelings. In the past, village life revolved around communal songs and dances. With the advent of mass media, this has largely been lost. Here, on the tsunami-ravaged seashore, the survivors are reclaiming this ancient way of communicating and healing as a community.