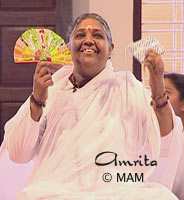 When Amma came to the temple for Meditation Day on Tuesday, a small purse and hand-fan were waiting for her on her peetham. After sitting down, Amma placed the purse’s strap over her shoulder and began fanning herself, beaming a smile as if she were modelling some of the most glamorous apparel in the world. Amma then showed everyone how the blade of the fan was made from chocolate-bar wrappers and how the purse had been woven from strips of disregarded plastic. Amma then asked the people who’d made the items to stand up. Two ashram residents rose to their feet—one from India and one from the West.
amma holding a plastic fan

“Amma is very pleased by these children’s efforts to create wealth from waste,” Amma said. “You make think it is only a small gesture, but through this the hearts of the individuals blossom and then others are inspired to follow. This can lead to significant changes in society.”

Amma then went on to explain how plastic, although cheap, is non-biodegradable. “This is one way to fight this problem,” Amma said.

Amma said that in general she was very pleased with how her children from the West are taking to heart and putting into practice her teachings of the importance of re-establishing the harmony between man and nature. Amma went on to give the example of how many devotees in America have formed car-pool groups in order to reduce the amount of cars they use to get back and forth from work. “In this way, they reduce the amount of pollution emitted into the atmosphere, reduce the money they spend on gas, reduce the use of gas, and reduce traffic,” Amma said.

One of the main weavers was an ashram resident from America named Meenamba. She says she was inspired to start the weaving project after one of Amma’s programs in Mumbai. When the program ended, local children came and began culling through the trash for hard-plastic bottles and clean paper. She learned that the children get about 50 rupees for each a bag they fill with plastic bottles and a few rupees per kilogram for paper. But the soft plastic (candy wrappers, etc.) wasn’t recycled in any way—just burned. Meenamba wanted to come up with a way that the poor trash-pickers could earn more money as well as help the environment. Eventually the idea of using the soft plastic as a weaving material dawned to her. 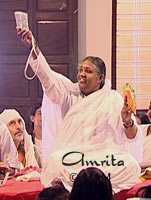 When Meenamba returned to Amritapuri, she started collecting various types of disregarded plastic—plastic bags, chocolate wrappers, plastic twine, laundry-soap packets, old banners advertising Ashram programs. She then sanitized all the materials by washing it and soaking it in EM (Effective Micro-organisms). When that was finished, all that was left to do was to cut it into strips and weave it. To do this, she learned a number of weaving techniques, including methods from Kerala, Tamil Nadu, Japan and Bavaria.

So far Meenamba and the others have made an assortment of items, including a pair of sandals and an asana for Amma. Some of the other things they have made include cell-phone cases and carry bags. 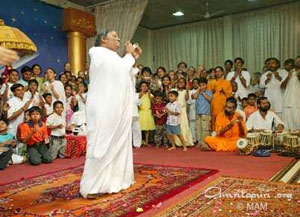 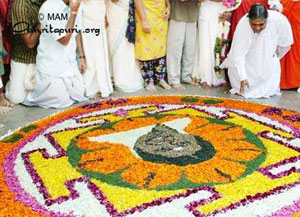 Beautiful decorations made by Indian students in front of Amma’s house during the 10 day Onam celebrations. 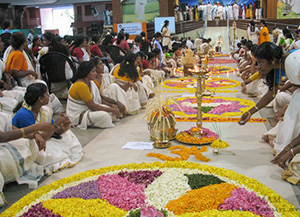 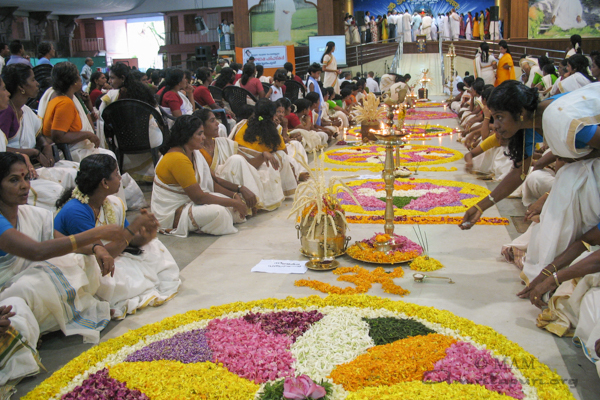 This morning, the main hall was abuzz with activity. Over a dozen groups of women had gathered to participate in a day full of activities in celebration of Onam. Each team consisted of women who were part of a Self Help Group (SHG) from the surrounding Allappad Panchyat where the Ashram is located. MAM has been fostering the growth of these SHGs which empower women in various trades such as tailoring, making leather goods, shoes, embroidery, weaving, and other fields.

The morning started out with a welcoming talk by Swami Amritaswarupananda followed by chanting Amma’s 108 names. The groups then began making Pookkalam* designs on the floor of the main hall as Amma gave darshan to the devotees.

Elaborate, colorful designs took shape in the aisle down the middle of the darshan hall. Petals of white, purple, orange, pink, yellow, along with green leaves quickly filled in the chalk-drawn templates on the floor. Hands moved rapidly across the designs, spreading out the petals, filling in gaps, adding a little here and there.

The women all wore matching saris with a different colored choli (blouse) identifying each group. Together with the flower petals, the saris formed a veritable rainbow of colors in the hall. When the pookkalams were finished, lamps were lit by each one, and the teams sat silently by their respective designs while judges looked on. The winning pookkalam would be announced later.

Next, there was a talent show. Each group took their turns singing traditional Malayalam songs while judges intently listened. Then, select women came to the microphone to show off their skill at vocalizing the sound ‘looloolooloolooloolooloo’ * which is sort of a yell/yodel and is usually called out during auspicious events or ceremonies such as weddings or festivals.

After the singing contests, about 24 women joined in a playful game of ‘musical chairs’. Finally, the winning pookkalam was announced. From the darshan seat Amma then addressed the gathered crowd, “You have made these pookkalams with thoughts of the Supreme in your mind, so every pookkalam is beautiful. There are flowers in the garden and in the wild – all bloom by the rays of the sun. In a competition, the judges have to set some standards to select a winner. But all the pookkalams have already been accepted by the Supreme. You have the grace and blessings.”

The colorful displays of saris and pookkalam flowers were soon matched by the beaming smiles on each face as they went for Amma’s darshan. 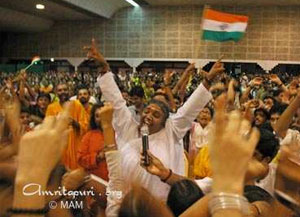 The 60th Independence Day of India was celebrated in Amritapuri by the students of Amrita University in the presence of Amma. This year’s Bharat Mata Puja was dedicated to the various kings of India who stood for virtue and dharma. The various cultural performances included dances, short plays and a video about the contributions of ancient India to modern society.

According to linguists, there are 6,912 languages spoken in the world today. Amma only speaks one of these—Malayalam. And while Malayalam is spoken by an estimated 48 million people, the 6.5 billion other people in the world pretty much have no choice but to rely on a translator when they speak to Amma. However the other day during darshan in Amritapuri, one devotee volunteering at AIMS Hospital may have found a loophole.

Amma had called a group of people working in AIMS’ software-development department to her side to discus a project. The majority of them were amongst the 48 million mentioned above. However, one, a young man named Nikhil, was not. His first language is Hindi; his second, English. One brahmachari who speaks both Malayalam and Hindi saw Nikhil standing in the back of the hall and called him to come join the others in his department near Amma. Once at Amma’s side Nikhil began speaking with Amma with the help of the translator, asking her questions about his seva and personal matters.

After sometime, the young man confessed to his translator, “Actually, even though I know it is not possible, I would like to keep speaking to Amma for another five or six hours.”

At this point Amma paused from her darshan and turned to the two. “What is it?” Amma asked. “Don’t you know he doesn’t understand Malayalam? You’re supposed to translate.”

“He says he would like to talk to Amma for another five or six hours,” the brahmachari said.

Amma then feigned a look of shock and said with a smile that with so many people coming to see Amma for one person to speak to her for so long was not really possible.

“He knows that, Amma,” the brahmachari said. “But it is a desire of his, and he just wanted to express it to Amma.”

But then Nikhil spoke up, “Amma might not be able to speak to me for that long here, but she could in my dreams. Will you do that for me, Amma?”

Smiling at Nikhil’s innocence, Amma said that, yes, she would come.

Nikhil then got up from Amma’s side, making room for another devotee. But after a few steps, he stopped, turned around and said, “Amma, but in my dreams please speak in Hindi! Don’t bring a translator.”

Looking northward from the top of the 18-storey tall flats in the Ashram. To the left is the Arabian Sea, to the right, the Kayamkulam Backwaters. In between is the Alappad Island on which the Ashram is located.