For anyone who has been following the evolution of the Ashram’s tsunami-relief work, it is clear that Amma’s intention is not merely to repair what was broken by the tsunami, but to fix things that had broken way before that fateful day. Through the door opened by the disaster, the Ashram has rushed in with everything from better houses, to better venues of education and employment, to better to medical care. 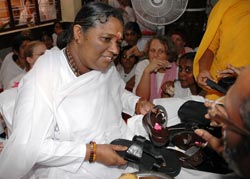 This vision of Amma’s is reaching its full fruition through a programme called Matru Gramam, (News) or Mother’s Village. Matru Gramam involves the implementation of a systematic plan to make small villages in Kerala more self-reliant, primarily through the establishment of self-help groups.

The first Matru Gramam is Alappad Panchayat, the collection of villages located on the peninsula in Kollam District, Kerala, where the Amritapuri Ashram is located. Matru Gramam will not be limited to the immediate area around the Ashram. But the programme will soon expand to all of Kerala’s 14 districts.

“We want to help the villages become self-reliant,” says Swami Jnanamritananda, one of Amma’s senior disciples, who is helping to coordinate the programme. “First we take a survey to determine what the village’s needs are, then accordingly we create an action plan, and from that we start providing the needed awareness camps, education and job-training. We want the villages to be able to produce all of the main items they need by themselves, rather than depend on outside resources. When people depend too much on outside resources, they suffer when strikes and other unpredictable events take place.”

With this in mind, the Matru Gramam villages will produce their own vegetables, clothes, soaps, sandals and other necessities. In order for the villages to accomplish this, the Ashram will help them establish self-help groups.

“The self-help groups are really just groups of families,” says Swami Jnanamritananda. “In the Matru Gramam villages, the goal is for every family to have at least one member that makes 100 rupees [approximately $2.30 U.S.D.] every day. This will cover the family’s basic needs. This can happen through the self-help groups.”

Depending on the size of the village, the self-help groups will comprise 10 to 20 members—one person from a family. Four to five of these cooperatives will then join together to form a cluster. The Ashram is providing the training in the fields the groups decide upon. For example, two of the groups in Alappad Panchayat are a sandal-making group and a tailoring group. The Ashram is also helping the villagers set up group bank accounts, as well as will coordinate and monitor their groups.

The first Matru Gramam meetings took place in Amritapuri in early September. In Alappad, the majority of the men work as fishermen, so the cooperatives will mainly comprise women. “I’ve come with hopes of earning additional money to support my two children who are attending school,” said Sebini, a young women from Alappad. “My husband is a fisherman, but his daily catch is unpredictable and we cannot survive on it.” Just prior to the meeting, Sebini had successfully completed the free tailoring classes provided by the Ashram. The Ashram is providing her and the other ladies in the self-help group with the sewing machines needed for their work. This will be Sebini’s first job. 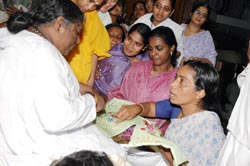 Jayasree, 40, also attended the meeting. She has been attending Ashram classes on how to make leather goods. “My husband is handicapped and cannot work,” she said. “I have two daughters in school, and when the tsunami hit, our home was damaged. Some walls fell in, we lost most of our possessions.”

In fact, the self-help groups have already received work orders,  including some for government departments.

Recently, the women working in the different self-help groups came to Amma with the first fruits of their work. The tailoring group with their towels, the sandal group with their sandals. When the sandal-making group offered their wares to Amma, Amma smiled, encouraged the ladies and then placed a pair of sandals on her shoulders—one on the right, one on the left—to show her pride in their accomplishment.