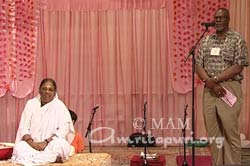 “There are thousands of veterans coming back from Iraq and Afghanistan that need to know about this,” Joe Thergood, the Deputy Secretary of the Department of Veteran Services for the State of New Mexico, said from the dais at the beginning of Amma’s second night of programmes in Albuquerque.

Thergood explained to the ballroom full of people that until that day he had never met Amma before, nor heard of her. He said that he had been in the hotel on business and at the conclusion of the morning’s program had happened to see Amma as she passed through the hotel lobby. When Amma passed by Thergood, she stopped briefly and took his hand. “I noticed that she didn’t shake anybody else’s hand—and I felt guilty… and I was honoured,” he said.

After Amma had gone, Thergood—who primarily works with veterans suffering from mental and physical disabilities—began speaking to a devotee, who coincidentally happened to be a Vietnam veteran. “I had no idea who he was, but I walked up to him and we started talking and it just so happened that he was a Vietnam veteran. And he shared with me his story—how Amma had blessed him 10 years ago after the hug. And that got my attention. And he said, ‘I was suffering with PTSD [Post Traumatic Stress Disorder] and I was healed.’” 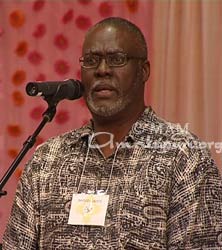 It was at this point that Thergood proclaimed—to a thundering round of applause and cheers—that Amma’s darshan and love would be a great help to the thousands upon thousands of soldiers returning from the Middle East who had incurred psychological problems during their tours of service.

“[Veterans] need the love that is exemplified in this audience and by Amma,” Thergood said.

Obviously moved by his brief meeting with Amma, Thergood then turned to face Amma, who was sitting on her peetham, and said, “Amma, I want you to know something. You’ve been with me all my life, and I didn’t even know it—because we’ve helped so many people.”

He concluded by reading a few sentences he wrote down after his brief encounter with Amma earlier that day: “We all have common concerns, common pain. We need uncommon healing, uncommon healing from Amma, and we welcome you to New Mexico for sure.” 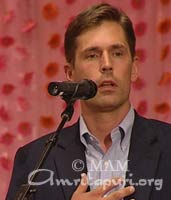 Amma was also welcomed by Martin Heinrich, a former council president for the City of Albuquerque who is currently seeking election to the U.S. Congress. “To look at the incredible change that her work has wrought is truly inspirational,” he said. “Healing the sick, housing the elderly, teaching people not just to make a living but how to live—these are things that we should all aspire to. And I believe we can all be inspired to make that change within our own life.”