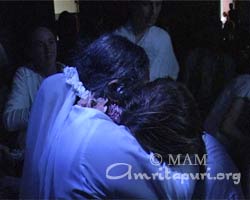 22 June 2008 — Albuquerque, New Mexico, USA
As the end of the morning darshan approached, during Amma’s first program in Albuquerque, suddenly all the lights went out in the hall. As there were no windows, the crowd was thrust into pitch blackness. A hush fell across the room. A little girl burst out crying, and one of the bookstore staff reached out a hand to comfort her, but being a stranger, it seemed he only made the situation worse.

At the front of the room, there was a single ray of light. Someone was holding a pen light over Amma’s head, but it barely pierced the darkness. Suddenly someone holding a laptop appeared on the scene, holding it open above his head, using it as a torch to cast at least a little illumination. It wasn’t really enough light to see by, but Amma, laughing, seemed touched by the devotee’s efforts. Then a third source of light appeared—a cell-phone held aloft, casting a faint glow above Amma’s head. One by one, lights flickered on the darkness and danced like fireflies toward the front of the room where Amma was giving darshan. Another computer. Another cell phone. Another flashlight. Oddly, none of them seemed to cast as much light as they might have… maybe the flashlights were almost out of batteries, and the computers’ energy consumption settings were on.

An Amrita TV crewmember came over with a camera spot, but even that was just a tiny light and not a huge spot… it was like everyone grabbed the first source of light they could lay hands upon and rushed to join the congregation around Amma.

As the scene unfolded, one was reminded of Amma’s advice that we should never fear that our own small light of love and faith will not be enough to dispel the gathering darkness of fear and hatred in the world around us… together, our many tiny flickering lights can shine like the sun and illuminate the whole world. And just so, the many tiny lights around Amma, held aloft by her devotees, together illumined the scene. And as all the other activities that unfold around the perimeter of Amma’s darshan program were shrouded in darkness and the ensuing silence, everyone in the hall moved toward Amma’s physical body, and her physical act of giving love, compassion and hope to her children—the only source of light.

At the time the lights went out, a local satsang had been singing an English bhajan to Amma. The refrain: “Amma, help me shine…” Someone standing near Amma wisecracked that it seemed their prayer had backfired.

While giving darshan in the dark, Amma corrected him. “Real shining does not mean having bright overhead lights… In temples, at the time of the diparadhana [arati worship with light], all of the temple lights are dimmed, and only the light of the oil lamp being waved before the idol remains. This represents the principle that it is only when we turn away from our external senses that we can discover the light within.”