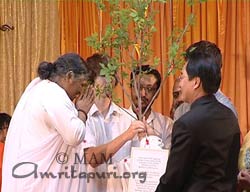 The terrorist bombing of the Oklahoma City Federal Building on April 19, 1995 took the lives of 168 people and scarred thousands more physically and emotionally. Despite the massive blast and subsequent fires, a 100-year-old American Elm Tree, part of the building’s original landscaping, survived. At the insistence of Oklahoma citizens, survivors, family members of the deceased and rescue workers, the “Survivor Tree” has become central part of the memorial dedicated to the victims of the blast.

At the beginning of Amma’s two days of programs in Addison, Texas, devotees from Oklahoma brought Amma a sapling to bless that was grown from a seed taken from the Survivor Tree. This sapling was presented to Amma by the Mayor of Addison, Joe Chow.

Immediately after Amma blessed the sapling, it was taken to Addison Town Park, where it was planted by the mayor, Swami Ramakrishnananda and members of the American wing of Amma’s youth group, AYUDH (Amrita Yuva Dharmadhara). 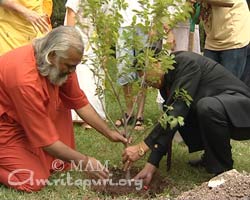 Just prior to Amma’s blessing of the tree, Elizabeth Muller, a devotee from Oklahoma, addressed the gathering. “The Survivor Tree is a witness to tragedy, but also a symbol of resilience, tenacity, perseverance and hope,” she said. “Today, it is a tribute to renewal and rebirth. The inscription around that tree at the memorial reads: ‘The spirit of this city and nation will not be defeated. Our deeply rooted faith sustained us.’ This tree can stand for the nurturing of the tree of compassion in the hearts of us all. For, as Amma has said, ‘Compassion is the only way to peace.’”

Welcoming Amma to Addison for the fourth year in a row, Mayor Chow lauded Amma’s tireless service to humanity. “She gives everything she has to the poor and the needy,” he said. “She has done so much. Let’s give her a big round of applause.”