Although Amritapuri was also hit by the flood, the ashramites are doing what they can to help the villagers, many of whom have lost all their clothes and food when their huts were swept away by the incoming water. 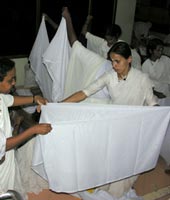 Recently devotees from Dubai had donated a large amount of clothes to be used in the Ashram’s clothing-distribution programme. There were also a lot of shirts, saris and dhotis from the Ashram Store and the Flea Market as well. Despite possible danger from further flooding, Amma’s disciples went across the river to collect such supplies in order to give them to the villagers—the majority of whom now only owned what was on their backs.

Ashram sheets were used for the sick and injured in the hospitals and to cover the evacuees as they slept in the night. The ashramites even gave their straw mats for the villagers to sleep upon.

“These people have nothing,” said one brahmachari. “If our only hearts go out to them, it is not enough. We have to give them whatever we can. I don’t consider it a sacrifice. I consider it my duty, an opportunity to serve.”