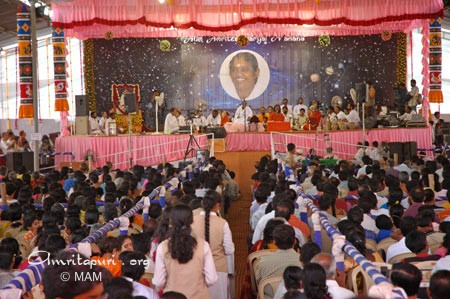 On the first night of Amma’s two days of programs at her ashram in Bangalore, Sri. Ashok Kumar, Honourable Minister of Health for Karnataka, helped Amma distribute checks to a dozen or so new enrolees in the Amrita Nidhi Pension Program, as well as distribute sewing machines to 10 impoverished women.

At the start of the program, Ashok Kumar also read aloud a message from the Honourable Chief Minister of Karnataka, Sri. H.D. Kumarswamy.

“A sympathetic heart is a fountain showering contentment,” the CM had written. “Just coming into contact with a smile that showers heavenly nectar helps transform countless people. I had always heard such things, but only when I saw Her Holiness Mata Amritanandamayi Devi did I understand it to be a veritable truth.”

“Amma is a great inspiration to mankind. For the spread of love, there is no bar or restriction in regard to caste, creed or country. According to Mata Amritanandamayi Devi, we are all like a string of pearls bound together on the thread of love.”

The CM then compared Amma to the 11th century mystic poet of Karnataka Sri Mahadeviyakka, writing how both mahatmas profess that everlasting peace can only come through love for mankind.